The defeat came at a critical time for the club's Central Division chances. 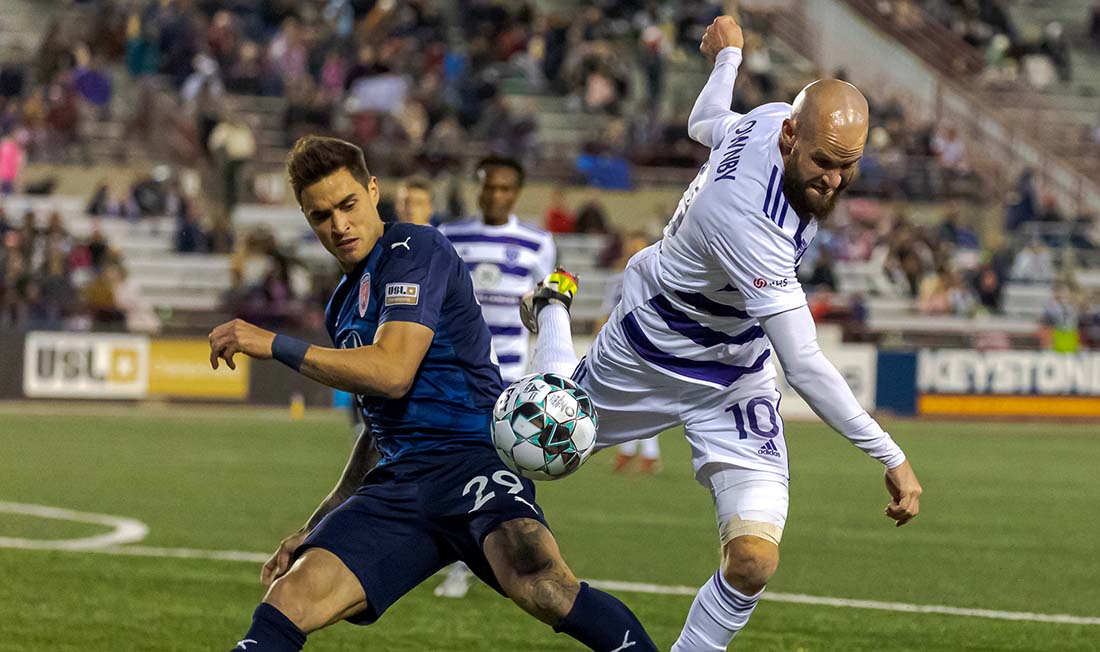 Louisville City FC made it back-to-back defeats for just the third time this season — and at a critical time — with a 1-0 loss Saturday to rival Indy Eleven.

The result at Carroll Stadium kept the boys in purple a point back of Birmingham Legion FC for the USL Championship’s Central Division lead. Two games remain to determine seeding for the playoffs beginning the first weekend of November.

The outcome also awarded the season Louisville Indianapolis Proximity Association Football Contest to Indy for the first time since the Eleven joined the league in 2018. The two sides entered 1-1-1 across three prior meetings.

"I felt we certainly created a lot of good opportunities that we needed to finish," said head coach Danny Cruz. "We talked a lot about critical moments. There at the end, made a mistake and end up losing the game. I can tell you I still feel a lot better after this one than I did after (Wednesday's loss to Memphis) with regard to performance. At the end of the day, though, it's about getting results.

"I'm unhappy with taking a loss here in Indy. At the same time a day or two will be good to get our bodies right — get these guys healthy. It helps me put a good group out on the field against Memphis next week and with the start starting playoffs."

While LouCity could claim the better of chances through the opening 85 minutes, one lapse in the 86th made the difference as an Indy Eleven cross into the box wasn’t cleared. The club’s leading scorer, Manuel Arteaga, hammered in his 10th goal of the year as a result.

The boys in purple didn’t have much time to answer from there, going on to their second away loss in four days following a 2-1 defeat Wednesday at Memphis 901 FC. Overall, the club now stands at 16-6-7, with Birmingham eligible to increase its Central Division lead Sunday against OKC Energy FC.

"We started with the right mentality and tried to push through," said defender Pat McMahon. "It’s just a tough loss, but we're gonna get back to work and move forward. That's the only thing we can do — focus on the next two games and get everything right so we’re not giving up goals. We need some clean sheets in the next two games leading into the playoffs."

That LouCity didn’t score a goal of its own Saturday is a credit to Indy Eleven goalkeeper Jordan Farr, who came up big in key moments while numbering five saves. He also got some help from the woodwork when Antoine Hoppenot’s sixth-minute shot caromed off the post before the forward sent another try off the bar in the 46th.

After both those Hoppenot chances, LouCity claimed the rebound and put a header on frame Farr denied.

LouCity returns home — where it has lost just once since Lynn Family Stadium moved to 100% capacity back in June — next Saturday, hosting Memphis. The season concludes with an Oct. 30 game in Birmingham that could decide the Central Division winner.

The boys in purple have already clinched a top-two finish in the division, meaning they’ll host an opening-round postseason game. The opponent, date and time are to be determined.

"At the end of the day you look at the process and you look at what we've done all year, and if I just look at these last few games and think, 'OK this is this is who we are,' then that would be easy to be concerned," Cruz said. "It would be easy to be frustrated, but obviously we want to win the game. Obviously, there's a lot of frustration in that locker room right now but there's certainly no concern with regard to us coming home against Memphis and getting ready to push forward toward the playoffs.

"...I do try to look at the process. I’m a process-oriented person, and I believe in this group, and I believe it what we've done. These last two results don't take away the other 28 games that that we’ve played and how we’ve performed. So, I have full confidence in this group of men, I have full confidence in what we're trying to do, and I'm confident that come Saturday we're going to turn this thing around and put ourselves in a good position leading into the playoffs. I fully believe that."

Man of the Match: Chris Hubbard