The boys in purple walked away frustrated after dominating the second half. 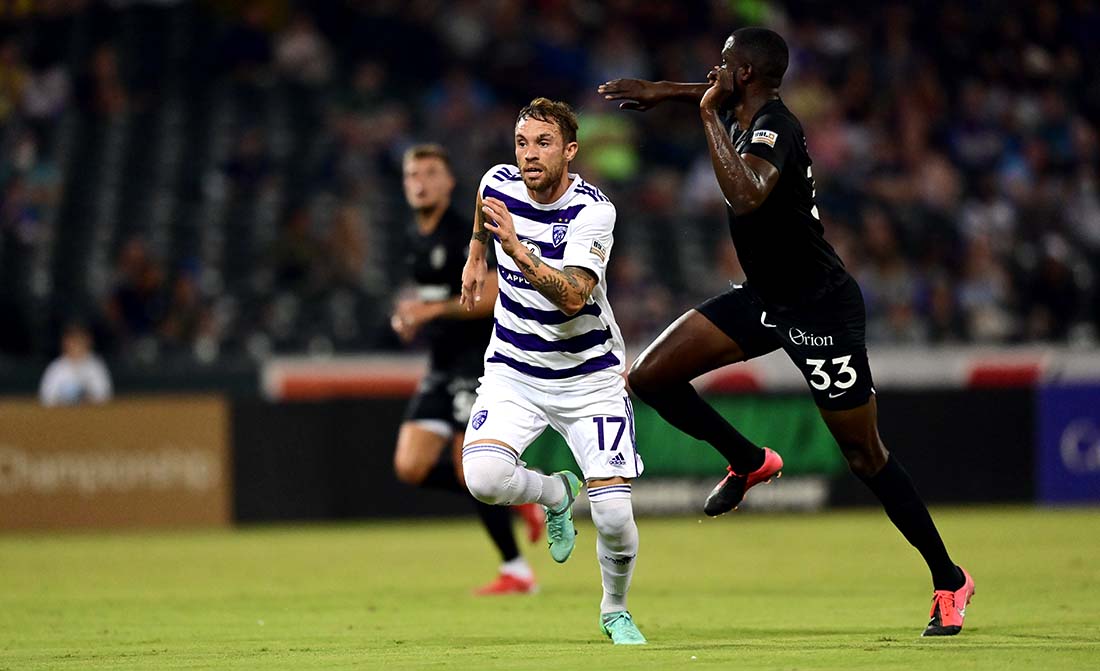 Early strikes by two of the USL Championship’s top scorers made for a level result Saturday on Louisville City FC’s visit to Memphis 901 FC.

Memphis’ Kyle Murphy slotted in his 15th goal of the season in just the second minute shortly before LouCity’s Cameron Lancaster answered with a seventh-minute equalizer.

The final whistle blew at AutoZone Park for a 1-1 draw, a frustrating result after the boys in purple controlled 68% percent of second half possession while aggressively hunting a game-winner.

"Obviously, we started the game really poorly doing the opposite of what we spoke about all week, so I’m really frustrated by that," said LouCity coach Danny Cruz. "Then Cam has an unbelievable finish that bails us out to go 1-1. I thought we created enough opportunities again to win the game, but ultimately it’s two points dropped, and we’re going to have to look at the tape and improve.”

LouCity moved its record to 14-5-6 on the season and extended its Central Division lead to four points, at least until second-place Birmingham Legion FC plays on Sunday. A draw also narrowed LouCity’s “magic number” for a playoffs clinch to six with seven games to go.

The boys in purple have better than a 99% chance of qualifying for the postseason, according to FiveThirtyEight.com, but they’re looking for the highest point total possible to get in line to host their playoff games.

"Two points dropped tonight makes that extremely frustrating," Cruz said. "I'm looking for a good response Wednesday (at Atlanta United 2), and I know that we'll have it. There's no doubt about that — but certainly a bad taste in my mouth after tonight."

In that respect, Saturday’s result marked a bit of a setback. But LouCity could also consider itself fortunate given how the game opened.

Working in transition, Memphis 901 FC used a pair of one-touch connections between Kadeem Dacres and Murphy, who slotted his shot smoothly into the corner for the early lead. It marked the second-fastest goal ever scored on LouCity behind only Lucky Mkosona’s opening-minute strike for Penn FC on June 16, 2018, to start a game that also ended level.

The home advantage didn’t last long. Minutes later at the other end of the pitch, Jonathan Gomez looped a cross to Lancaster, who finessed a header from just outside the box over a reaching Memphis goalkeeper to tie the score.

"Obviously it's not something you want — going down early — but going down in the second or third minute, you know you've got 90 minutes to turn it around so you can't put your head down," Gomez said.

As for Lancaster's bit of brilliance, Gomez added: "I'll tell you I was aiming for Cam, but I wasn't necessarily thinking he would head it from there. So that's a spectacular, world-class finish for him."

Murphy now ranks second in the USL Championship in scoring, while Lancaster’s in a tie for third. They’re both chasing Colorado Springs Switchbacks FC’s Hadji Barry, who with 23 goals leads the Golden Boot race.

LouCity can claim the better of Saturday’s game, out-shooting Memphis by a 15-7 margin and out-passing the opposition 464-283. It wasn’t until the second half, however, that 901 FC so much as tried a shot in the box during a final 45 minutes consistently broken up by whistles.

In hindsight, the best chances for the boys in purple to pull ahead came around the break. Seconds into first half stoppage time, Antoine Hoppenot found himself with a point-blank look but didn’t get on the end of it. And with the final kick of the half, Paolo DelPiccolo forced a Memphis save when he struck a deflected ball in the box.

DelPiccolo also got on the end of a Gomez corner kick in the 51st minute that left teammates appealing for a goal. A further look at the replay showed Memphis' goalkeeper, Cody Cropper, deny the header at the goal line.

There were pluses in the second half, particularly with the returns from injury by midfielder Corben Bone and defender Pat McMahon. Both came on for the final 24 minutes and should be available moving forward when LouCity continues its road trip Wednesday in Atlanta.

“Corben and Pat are ready to go," Cruz said. "They’re available for selection, obviously, playing them tonight. They’ll push the group with regard to selection in the team.”