Preview: What to watch for with LouCity at Memphis 901 FC

The boys in purple head to Memphis for the first time in a game with playoff implications. 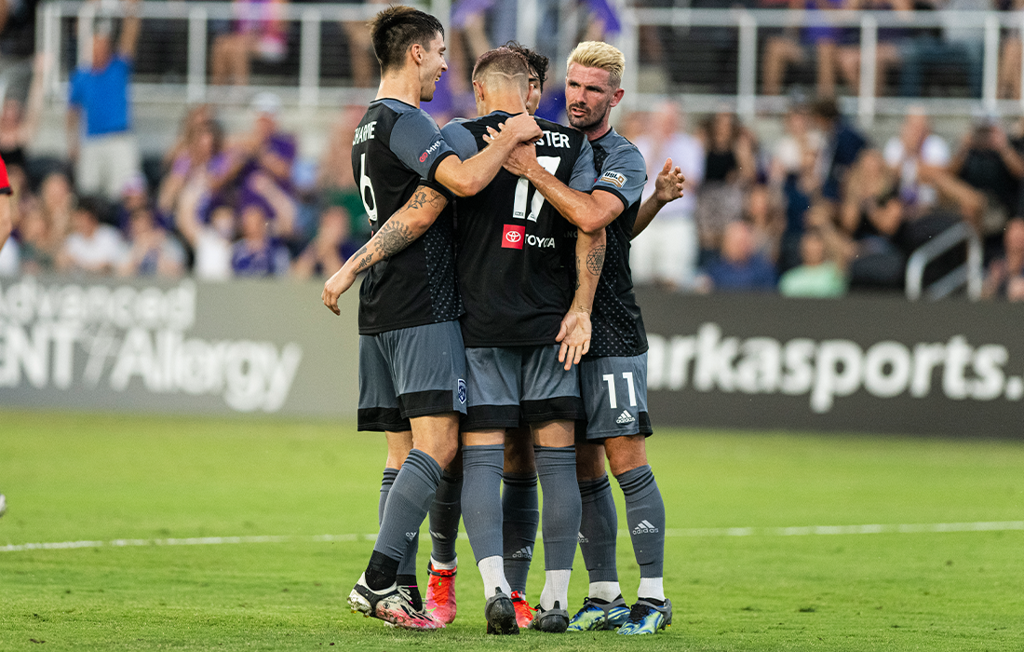 The heat has broken locally, and the arrival of sweater weather served as a reminder this week around the Louisville City FC training pitch: It’s almost playoff time.

A scenario also exists for the boys in purple to clinch their postseason USL Championship spot pending the next round results, with the magic number now only four points.

A LouCity win at Memphis 901 FC — the game kicks off at 8 p.m. ET Saturday at AutoZone Park — would account for three of those points. The other could be realized should OKC Energy FC and Indy Eleven play to a draw in their 6 p.m. ET Sunday matchup.

With the USL Championship split into divisions this season, the top-four from the Atlantic, Central, Mountain and Pacific wild qualify for the playoffs. According to FiveThirtyEight.com’s predictions, LouCity has a greater than 99% chance of making the postseason — and then it’s a matter of seeing how high the boys in purple finish.

At 14-5-5, LouCity has accumulated 47 points to sit a full game up atop the Central Division. Memphis is 8-8-7, on 31 points and a victory of its own away from moving into a playoff spot.

Here’s more of what to watch for on Saturday night…

“I’ve said it before that goal is to make sure that we’re continuing to progress every week and that we’re able to host as many (playoff) games as we can. But, we still have a task at hand. We continue to week i and week out. If we keep doing the things that we’ve been doing and progressing in the ways that we have been, I’m confident we’ll put ourselves in a position to host.”

Away days: LouCity at Memphis marks the fourth of five straight road games for the boys in purple to finish out September before a highly anticipated arrival home to Lynn Family Stadium, where on Oct. 3 LouCity hosts New Mexico United. The 3 p.m. kickoff between clubs that rank first and second in the USL Championship in attendance will be broadcast on ESPN2. LouCity averages 9,953 a game with New Mexico at 8,337.

About the offense: LouCity has been known to put one, two or more goals in the back of the net per game — and that’s reflective of what they deserve. The boys in purple sit second in the league in expected goals for at 1.91 per game. The prolific Phoenix Rising FC leads the USL Championship at 2.42 xGA per game. LouCity’s 47 goals on the season are also third behind Phoenix (56) and Colorado Springs Switchbacks FC (52).

And the defense: While LouCity’s high-pressing scheme has produced just six clean sheets, it’s fair to consider the club unlucky in that respect. The boys in purple rank second in the league in expected goals against — 0.93 per game — a number only one-hundredth off 0.92 for the Tampa Bay Rowdies, who are on a run of eight straight shutouts. LouCity boasts a +20 goal differential, best in its division.

Season series: LouCity’s first trip of the season to AutoZone Park arrives more than three months after the boys in purple put up a 3-0 victory during Lynn Family Stadium’s “Grand Opening” celebration. That victory kickstarted a midseason run of 13 games unbeaten in 14 that elevated LouCity atop the Central Division table. Games remain between Memphis and Louisville on Oct. 13 and Oct. 23.

Hoppenot’s heroics: With the Indy Eleven shifting home games this year back to Carroll Stadium, site of Antoine Hoppenot’s 2019 Eastern Conference Final stoppage-time equalizer, the forward was influential in another meeting between the rivals last weekend. Hoppenot both fired home a 41st-minute goal and assisted on Cameron Lancaster’s scoring 69th-minute header in a 2-0 victory.

Counting on Cam: Back in the starting lineup after a game away, Lancaster made his acrobatic flick to the back post his 13th goal of the season and 64th in his regular season USL Championship career. That figure ranks him as the league’s No. 5 scorer all time, four off former LouCity striker Chandler Hoffman’s 68 goals.

Defensive shutdown: While Hoppenot and Lancaster shined in the final third, at the other end of the formation LouCity’s back line put forth one of its best efforts this season against Indy. The Eleven attempted five shots. While two landed on target, they were saved by goalkeeper Chris Hubbard. Only one attempt was made from inside LouCity’s box.

Gibson’s good form: Indy Eleven’s leader last season in minutes played now wears purple, and Tyler Gibson made the most of his time on the pitch Saturday versus his former club. The midfielder tallied a team-high 22 passes in the opposition’s half, won possession back six times and prevailed in three duels. Gibson has played a key role since his offseason signing with LouCity, tasked with filling the void of all-league midfielder Devon “Speedy” Williams.

Stat stuffers: As he has all season, Sean Totsch ranks atop the entire USL Championship in passes made with 1,587 – 200 more than second place on the list. Outside back Jonathan Gomez shares the top spot for crosses made at 136 with Pittsburgh Riverhounds SC’s Kendardo Forbes, while midfielder Brian Ownby’s in a three-way tie for second in the assists race at eight on the year.