Bell: What we learned from LouCity at OKC Energy FC

Paolo DelPiccolo led the line with a goal-scoring effort in the draw. 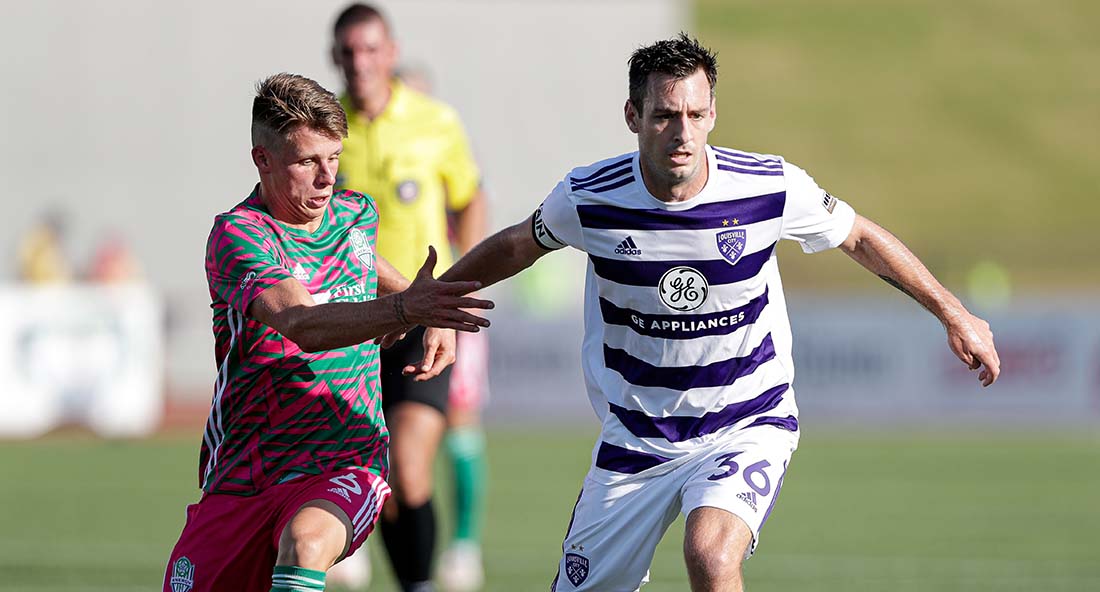 Louisville City FC drew to OKC Energy FC on Sunday night in a game that LouCity seemed to dominate but couldn’t finish its chances.  And though a point on the road is usually a good result, a team of this caliber will be disappointed.

The fixture marked LouCity’s final regular season game against Energy FC in a four-game series, two of which were draws and two of which were wins for LouCity. With this latest draw, LouCity has dropped points in four out of five of its last games.

The boys in purple still have a four-point cushion over second-place Birmingham Legion in the USL Championship’s Central Division, and OKC is a quality side, still holding the group’s fourth and final playoff spot. Bigger picture, LouCity hopes to post the league’s best overall record and sit five points off that with nine games to go.

“It’s obviously frustrating to only get a point, but I was proud of the effort from the group,” coach Danny Cruz said. “I think we created enough chances to win the game, but ultimately, I’m frustrated only coming away with a point. I did feel like the players executed the game plan but we just didn’t finish our chances.”

Here’s more of what we learned Sunday…

A force on the attack

LouCity captain Paolo DelPiccolo scored the equalizing goal thanks to some perfect positioning in a dangerous area. But his heat map shows an all-around, box-to-box effort for a midfielder who has taken on a more advanced role in the club’s attack this season.

DelPiccolo also accumulated game-highs in shots (5) and shots on target (2) on Sunday.

“It’s no secret how important he is to the way we want to play,” Cruz said. “I feel that he’s put himself in excellent positions this season. The way he leads this team is honestly like nothing I’ve never seen before.”

DelPiccolo won 100% of his aerial duels and two fouls for his team. The former University of Louisville standout also made notable defensive contributions against Energy FC, including 2 tackles while gaining possession from OKC on five occasions. DelPiccolo made his 22nd appearance, second-most on LouCity’s roster in 2021 behind defender Sean Totsch, who has played in every game.

Cameron Lancaster was listed as questionable for the OKC game and didn’t end up on the team sheet at all. His presence and goal-scoring threat were clearly missing as LouCity put in 17 crosses, only one of which was converted when DelPiccolo got on the end of a ball deep into first half stoppage time.

The boys in purple tallied 15 shots, but only four were on target. That said, Lancaster’s replacement, Kyle Greig, was unlucky to not score given he had an early shot deflected off an Energy FC defender’s arm in the box, and another late chance off his interception near the OKC goal was saved.

Lancaster is third-highest scorer in the USL Championship with 12 goals, which he has poured in over the course of just 16 appearances. As for the players who rank ahead of Lancaster, Colorado Springs Switchbacks SC’s Hadji Barry has scored 21 goals in 23 appearances, and Pittsburgh Riverhounds SC’s Russell Cicerone has 14 goals in 25 games.

Despite dropping points against OKC, LouCity’s defense was solid throughout the game.

Energy FC’s goal arrived early against a unit that tends to leak goals late. This time, the boys in purple locked down after conceding, allowing the hosts only 4 shots collectively.

“I certainly feel that the group put in a shift tonight in tough conditions,” Cruz said. “We limited them to four shots on the day. We limited their opportunities, we created a lot of opportunities and if you continue to do that you’re going to win a lot of games. We’ll walk away with a point and we will look toward next week.”