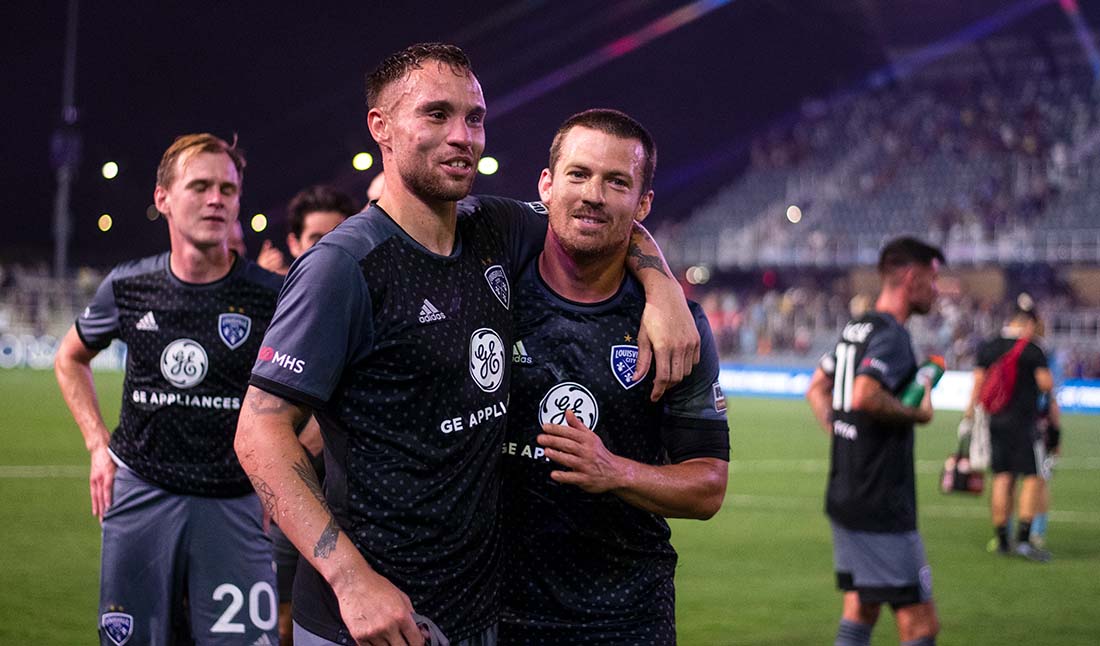 Having seen its USL Championship Central Division lead dwindle to a point in recent weeks, Louisville City FC answered a poor run of form with an emphatic performance Tuesday.

Four LouCity players scored in a 4-2 victory over host Hartford Athletic, and the boys in purple did it on ESPN2, flourishing during the evening’s only nationally televised soccer game.

The victory improved LouCity to 12-5-4, with 43 points four more than second-place Birmingham Legion FC. It also signaled a resurgence after seeing points dropped in three straight games, including back-to-back losses entering the night.

LouCity netted its goals with supreme efficiency, credited with 14 shots — 11 of them on target. The lone exceptions included a Cameron Lancaster short corner off the bar, deflected Paolo DelPiccolo attempt that hit the post and blocked Jonathan Gomez try inside the box. Otherwise, the boys in purple demanded Hartford goalkeeper Jeff Caldwell’s attention.

Lancaster opened scoring in the seventh minute, slotting a shot through Caldwell’s legs before being denied a similar chance in the 29th minute. That rebound, however, went straight to Jorge Gonzalez, who smashed home a second goal.

Hartford answered at its home Dillon Stadium to equalize just before the half, at which point LouCity had to make a key change, bringing on goalkeeper Chris Hubbard for his first action since July 14 in relief of an injured Parker Siegfried.

It was a shutout performance from there — Hartford didn’t land a shot on target over the final 45 minutes — as the boys in purple continued their scoring ways. A 56th-minute Akil Watts corner marked his first USL Championship assist when it fell to Ownby for a headed goal. Three minutes later, Antoine Hoppenot scored on a highlight effort, bending in his shot after a solo run from the left side.

“It felt really good,” Hoppenot said. “It’s been a while since I scored a goal, so it’s nice to get one that eases the pressure on our team a bit in a hard-fought game…There’s pressure every game to get a result. We hold ourselves to a standard that we expect to win a game, but especially after losing two a row and seeing Birmingham close the gap, it’s nice to get three points.”

This looked more like the LouCity of mid-summer as the club scored four goals for the third time in 2021. It marked the second performance with just as many scorers going back to a 4-1 victory Aug. 7 over Sporting KC II.

With his goal, Lancaster moved to fifth on the USL Championship’s all-time scoring list at 63 for his career. Ownby also reached a milestone thanks to assisting Lancaster; eight on the season are a career-high and tied for the league lead.

As LouCity prepares for another trip to play OKC Energy on Sunday, Lancaster said, “You obviously want to right the wrongs of the past two games and bounce back as good as we can. We just needed maximum effort today, to focus on our football, and thankfully it paid off.”