Preview: What to watch for with LouCity vs. Atlanta United 2

The boys in purple are looking to hold their first-place standing Saturday. 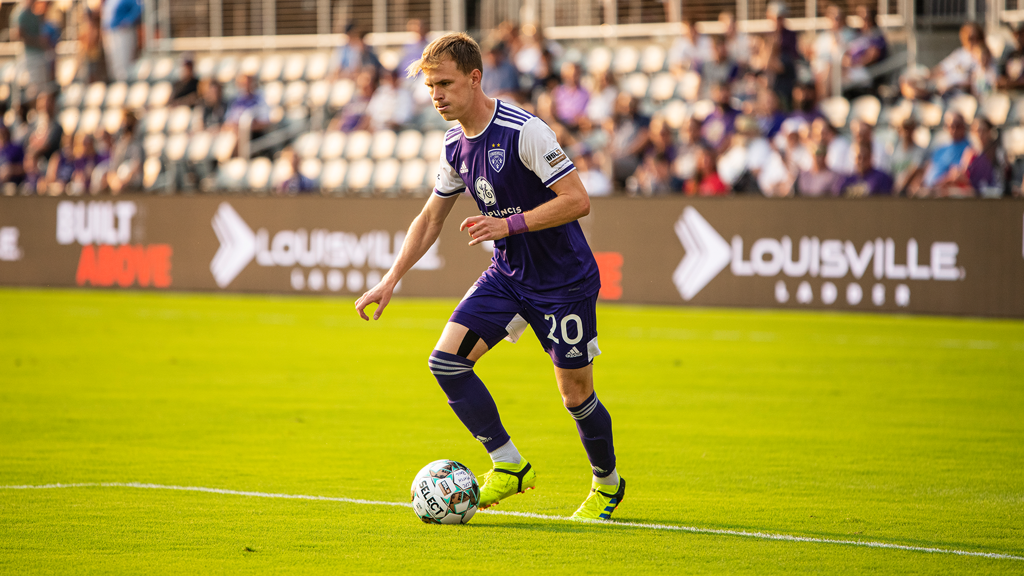 Having returned to the top of the USL Championship’s Central Division, Louisville City FC will be looking for a bit of payback Saturday night.

A 7:30 p.m. matchup with Atlanta United 2 at Lynn Family Stadium marks the third meeting already this season between the two sides. Last time they met, Atlanta escaped with a 1-0 victory on June 6.

Since then, the boys in purple have seen their offense hit its stride. They’ve scored 20 goals over seven games, six of them unbeaten, including Wednesday’s 3-1 victory over OKC Energy FC.

At 7-3-2 overall, LouCity is a point clear of Birmingham Legion FC to lead the Central Division. Atlanta has seen a dip in form, meanwhile, entering with three losses and two draws over its last five games.

So something will have to give Saturday. Atlanta hasn’t conceded more than two goals in a game this season even as the club slid to 3-5-5 due to some scoring woes. Just once in its last five games have United tallied multiple goes themselves.

In their other meeting this year, LouCity defeated Atlanta by a 2-0 score back in the teams’ April 24 season opener. They’ll conclude their series — all Central Division foes play each other twice home and a way — on Sept. 29 in Georgia.

Here’s more of what to watch for Saturday…

Trending right: Under coach Danny Cruz’s leadership, LouCity has developed one of the USL Championship’s most explosive offenses, with its 26 goals scored tied for first with Western Conference powerhouse Phoenix Rising FC. The boys in purple also locked down better on defense Wednesday, reversing a trend that had seen them concede seven first half goals in three games. OKC Energy FC numbered just one shot on target in the opening 45 minutes.

Back in the XI: Star striker Cameron Lancaster returned to the starting lineup Wednesday for the first time in four games owing to a concussion suffered last month and played past 70 minutes for the first time since May 22. In the process, the Tottenham Hotspur product scored his team-leading seventh goal of the season on a 41st-minute rebound against OKC Energy FC. Lancaster is tied for fourth in the USL Championship in scoring having only made nine appearances.

On both ends: Defender Jonathan Gomez has acted more in a utility role as LouCity’s left back, with the 17-year-old also plenty involved in his club’s attack. Gomez registered two assists in the midweek victory, making him the only defender in the USL Championship to tally at least two goals and four assists on the season. Gomez tracked back as well for an eye-catching, stoppage-time block against the Energy, helping the boys in purple hold their two-goal advantage.

A celebrated debut: LouCity’s youth academy has a mission to develop top local talent and prepare them to become professionals. On Wednesday night, 16-year-old defender Josh Wynder became the second player to complete that pathway as an 86th-minute substitution. The Oldham County native, whose pro deal was announced in June, followed 18-year-old brother Elijah in his travels from the LouCity academy to first team spot.

Making an impact: Defender Wes Charpie lags behind a number of his back line counterparts in minutes on the pitch given a nagging preseason injury that sidelined him to start the season. But Charpie has been quite solid since returning to the rotation. Making his fifth start and seventh appearance of the campaign, he headed in an early corner kick Wednesday that served a the go-ahead goal against OKC. On top of the goal, the Florida native recorded a game-high pair of interceptions and gained possession back eight times.

Bone’s in the zone: With 28 chances created this season, midfielder Corben Bone is just one off the lead league. The veteran saw the favor returned against OKC Energy when Gomez made a driving run into the final third and dished a pass right to Bone’s feet at the top of the box. The sequence resulted in Bone’s third goal of the season as he remains an active thread developing behind LouCity’s highest line.

Captain McCabe: With midfielder and longtime captain Paolo DelPiccolo's minutes limited Wednesday — LouCity is, after all, in the midst of three games over eight days — another of the club’s mainstays took the armband. Midfielder Niall McCabe completed 84.6% of his passes and placed a shot on goal in the 3-1 victory in what was the eighth start of the season for LouCity’s all-time leader in appearances.

McLaughlin’s might: Forward Jimmy McLaughlin, who joined LouCity this season after rising to prominence with former rival FC Cincinnati, likewise made plenty of an opportunity Wednesday. Making his second start of the season, the forward played along the left wing and finished with a team-high three good crosses and five open-play crosses. Cruz made it a point to call out the effort afterward, saying McLaughlin’s "mentality is fantastic on a daily basis. His energy is contagious.”