The boys in purple were shut out for the first time this season Sunday night. 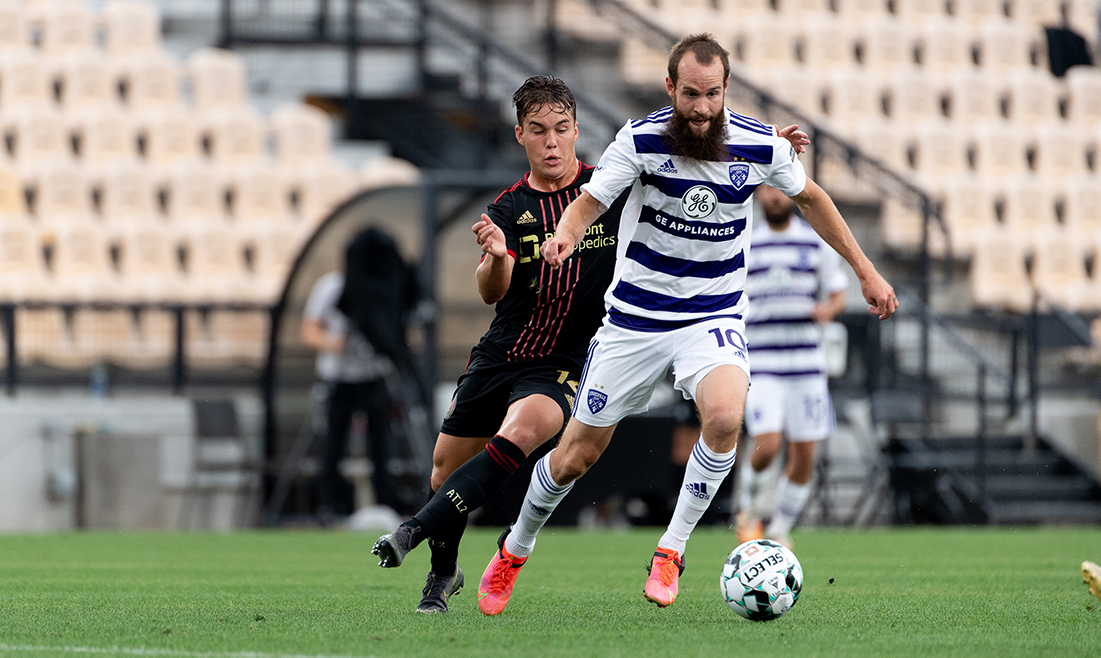 One of the USL Championship’s most surprising offensive threats — of all positions, Atlanta United 2’s right back — continued his goal-scoring ways Sunday night to deal the boys in purple a second straight defeat.

Combined with a stunning late penalty save by the host side, all Atlanta needed was McFadden’s one-touch finish on a 27th-minute cross near the back post for a 1-0 victory over LouCity at Kennesaw State University’s Fifth Third Bank Stadium.

The Notre Dame product McFadden, drafted 59th overall earlier this year by Major League Soccer’s Atlanta United, made it his fifth goal of the young season, only one off USL Championship leader Santi Moar of Phoenix Rising.

As a result, LouCity dropped to 2-2-1 — and penalty kicks remained a sore subject. A week after conceding two of them in a loss to rival Indy Eleven, this time the whistle blew in the club’s favor. But Niall McCabe’s 81st-minute try from the spot, along with a second chance shot, were both saved.

The boys in purple will look to regain some momentum in front of a large crowd Saturday when hosting Memphis 901 FC at Lynn Family Stadium in the venue’s first 100% capacity game.

“I certainly feel we’re creating enough chances to win games, and I’ve felt that here two games in a row," said coach Danny Cruz. "But the score line is what matters. Chances are great, but if you’re not finishing them, then ultimately you put yourself in a position to lose the game.

"We need to be better in individual execution and collective execution, and that starts with me making sure we’re consistently working on it and progressing daily.”

Before McFadden’s game-winner, LouCity had seen Sunday’s best chance. In the 20th minute. Corben Bone left a nice ball in the box to Antoine Hoppenot, whose shot was turned away. Following the goal, the boys in purple continued to hunt for an equalizer, too.

LouCity out-shot Atlanta 19-3 in a second half that included a 60th-minute sequence in which McCabe flew into the box to rifle a loose ball before Kyle Greig saw his follow up fly over the bar.

In the 71st minute, a flurry of shots in the box couldn’t find the back of the net either for LouCity. Amid them, the goal scorer McFadden prevented en equalizer from the opposition, clearing a ball off the line.

Finally, in the 81st minute, second half substitute Wes Charpie went for an ambitious bicycle kick on goal. An Atlanta United 2 defender was whistle for a hand ball, leading to the penalty save from goalkeeper Alec Kann.

"I think we end up winning the game had that gone in," Cruz said of the penalty, "but again, these are chances we are continuing to miss. As you can tell, statistically we're having a ton of the ball and creating chances, but the last two weeks we're not winning games.

"I feel we have a more than good enough team to continue to fight for a championship. That's my goal here, and this a bump in the road. I have complete faith in the locker room that we're going to come back to Lynn Family (Stadium) next weekend and turn it around."

In defeat, LouCity continued to mix its starting lineup, seeing Greig make his first start in purple as striker Cameron Lancaster rested a sore hamstring. With Jonathan Gomez on international duty training with the Mexican National Team, Napo Matsoso started at left back, and Brian Ownby made his return from suspension, seeing his first minutes since May 8.

"We can't say that we’re missing certain pieces because honestly, we expect to go out and perform well every game," said defender Sean Totsch. "They had some young pieces out there too, and they had a new coach. You could say that things might not have worked out for them, but they came out firing. So, there’s no excuse there. We've just gotta start better and finish our chances."

There were chances galore despite the shuffling, as LouCity tried 19 of its 23 shots from inside the box and wound up holding a majority of the possession against an opponent the boys in purple defeated 2-0 back on April 24 in both teams’ season opener. Since then, Atlanta United 2 has proven itself a formidable side, going unbeaten in five of six games.

Man of the Match: Kyle Greig