Preview: What to watch for with LouCity vs. Tampa Bay 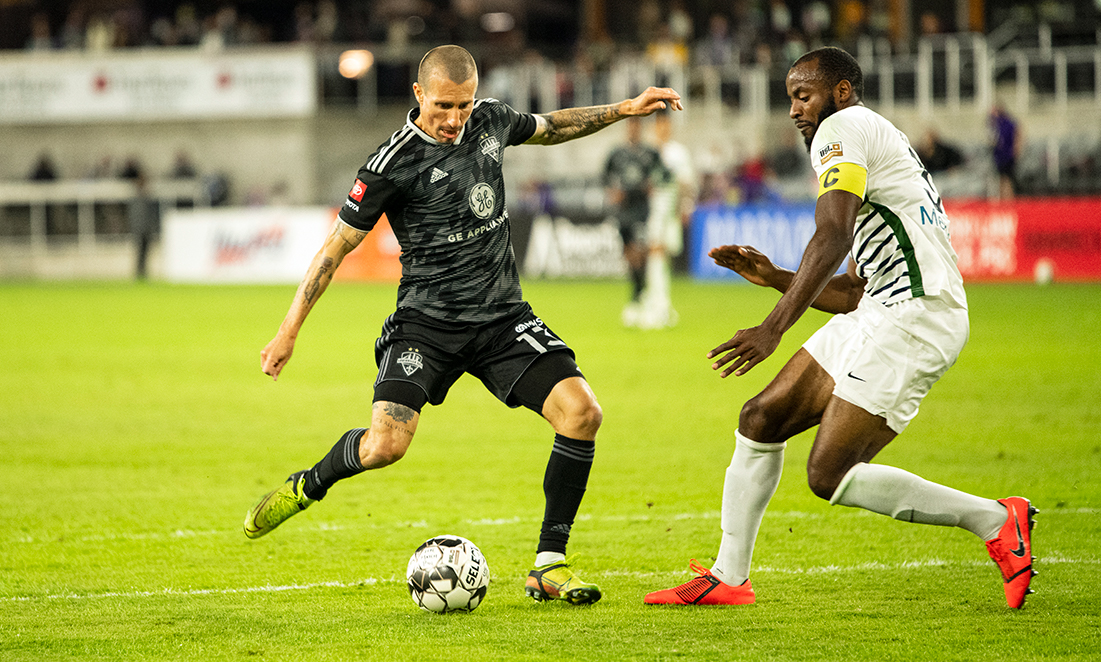 Louisville City FC has been synonymous with making the USL Championship’s Eastern Conference Final since the franchise launched, advancing to the national semifinal round in all six of its seasons.

Lately, the boys in purple have also made habit of taking the East’s trophy.

They’re looking to make it an unprecedented fourth in a row at 7:30 p.m. Saturday when the Tampa Bay Rowdies visit Lynn Family Stadium amid streaks of 13 games unbeaten and seven straight wins for the home side.

Both clubs went into the playoffs as No. 1 seeds from their regionalized regular-season pods. To get to this point, LouCity then knocked off Pittsburgh Riverhounds SC and Saint Louis FC by 2-0 scores. Tampa Bay, meanwhile  dispatched Birmingham Legion FC by a 4-2 score before a 1-0 win over the Charleston Battery.

These squads are familiar with one another having met three times in 2019, including a rain-soaked playoff game at LouCity’s former home, Louisville Slugger Field. But the 2020 competition structure makes this their first matchup of the current season, offering both sides the rare chance to scout a new opponent.

Winner reserves the right to host the USL Championship Final — the league’s first game to be broadcast by ESPN — on Nov. 1.

“In terms of what we are doing on the field we have a process. We have a periodization that we go through, so we are pretty dialed in that way. We try and make the objectives for each session based on what we see in our upcoming opponent. We’ve had to look at a lot of tape on Tampa and feel that we have a good idea about them, but it’s been a lot of work in the film room this week.”

“…Same coach (for the Rowdies), and Neill Collins do a really good job. He does an excellent job with his team and I think the game sets up to be a classic Eastern Conference Final. They have added a few pieces that I think compliment what Neill is looking for in his team, so he should feel confident. They are in good form, we’re in good form, and I think you’re finding the two best teams in the east to reach the final and play for an opportunity to go to the USL Championship Final.”

Our time: Since beginning play in 2015, LouCity’s postseason success is unparalleled within the USL Championship. The boys in purple have reached a sixth straight trip to the Eastern Conference Final, having never fallen short of the league’s national final four. Now they’re bidding to play in a fourth straight USL Cup Final. In both 2017 and 2018, LouCity added stars above its crest as the league’s champion.

Playing percentages: Still favoring the boys in purple, the computers at FiveThirtyEight.com give LouCity a 36% chance of hoisting its third USL Cup in four years. That number jumped from 26% following the club's 2-0 Eastern Conference Semifinal win over Saint Louis FC last weekend. It’s close in determining a league favorite with Phoenix Rising checking in just one point behind at 35%.

The streak(s) continue: As USL play-by-play announcer Mike Watts unearthed last week, LouCity’s 13-game unbeaten and 8-game winning streaks are the longest of any professional soccer league in the United States in 2020. After going 1-3 upon the league's restart, LouCity hasn’t lost since the calendar turned to August, rising from the bottom of its regular-season Group E table to earn a No. 1 playoff seed.

Scouting the Rowdies: Saturday will mark the first time LouCity and Tampa Bay have met in 2020 given the USL’s regionalized scheduling. The Rowdies are expected to line up in a familiar 3-5-2 formation that has proved formidable defensively, conceding just 44 total shots on target. Tampa Bay, Group H’s top seed, advanced after playoff wins over the Birmingham Legion (4-2) and Charleston Battery (1-0).

‘Lucky’ Moments: Former LouCity forward Lucky Mkosana, traded to the Rowdies in 2019, has been incredibly efficient off the bench in the postseason. He bagged a 79th-minute, game-winning header for the Rowdies to defeat Charleston a week after also scoring in the Birmingham victory. Mkosana has scored four goals in all in his first full season for Tampa Bay.

An even trade: The move that sent Mkosana to Florida has also paid off for LouCity, who received Antoine Hoppenot. The midfielder/forward scored a pivotal goal in last year’s Eastern Conference Final, equalizing with the Indy Eleven late, and this season has gone on to lead the boys in purple with seven assists, good for fourth in the league. Just last week, his cross to Cameron Lancaster led to an 18th-minute game-winner over Saint Louis FC.

Lundt comes up large: LouCity goalkeeper Ben Lundt notched his league-leading ninth clean sheet overall — and third this season against Saint Louis — in last Saturday’s victory. The FC Cincinnati loanee has consistently come up in clutch moments for the club but was called upon much more often in the conference semifinal, making a season-high nine saves, including when he smothered an early penalty kick to keep the game scoreless.

Cam’s still the man: It seems Cameron Lancaster, the 2018 Golden Boot winner, just won’t be stopped. His goal against Saint Louis FC marked the Englishman’s seventh in as many games, boosting his season total to 12, just two off the league lead. Lancaster continues to be the most efficient scorer in the USL, getting a goal every 109.2 minutes he's on the pitch.

A home fortress: Thirteen of LouCity’s 18 games this season have been played on its home turf, Lynn Family Stadium, where the boys in purple currently boast an eight-game winning streak. Current capacity is in the range of 4,900 amid the COVID-19 pandemic, or roughly 30% of the facility’s maximum capacity of 15,304, but coach John Hackworth has spoken frequently of the environment a dedicated group of supporters has created.

Pesky penalty: Defender Sean Totsch's 11th-minute foul, plus subsequent yellow card, marked the first penalty kick LouCity has either been awarded or conceded in the club's 18 games this season — a statistical anomaly in a crazy year. Ben Lundt could partially thank timing for saving it. In the playoffs, goalkeepers are already preparing to face penalties in the event of a draw after regulation and a pair of 15-minute extra time periods.