LouCity defeats Saint Louis FC one last time; it's on to the conference final

Cameron Lancaster's strike during a frenetic first half made the difference against the Kings' Cup rival. 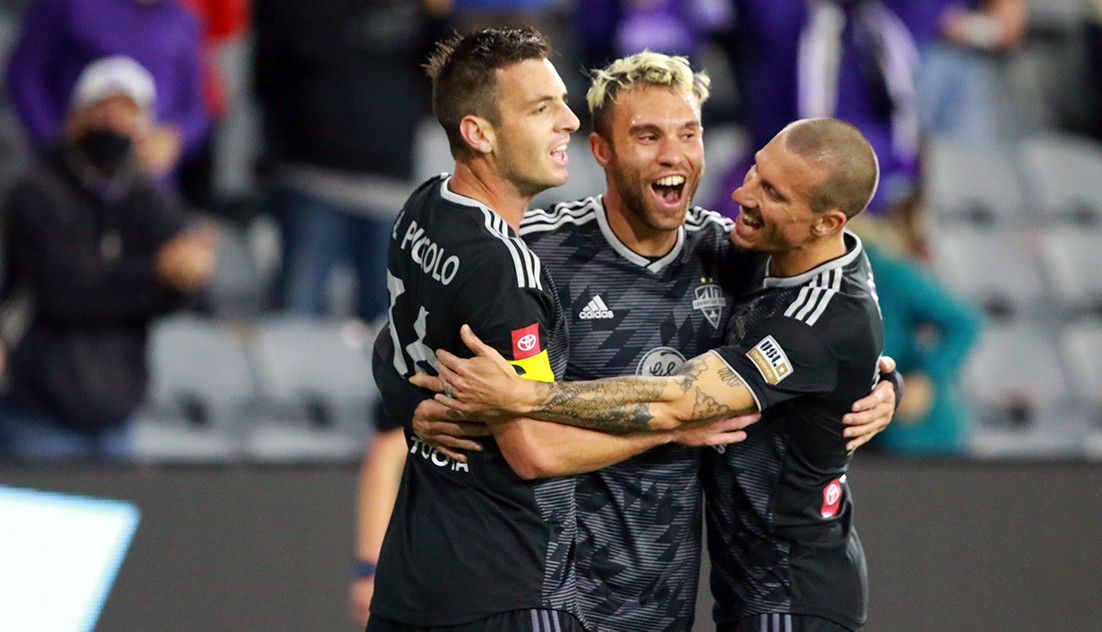 During a year in which seemingly everything has changed, there remains this constant: Louisville City FC is going to the USL Championship’s Eastern Conference Final.

The boys in purple — who have visited the league’s national semifinal round every season since launching in 2015 — dealt a final blow to rival Saint Louis FC on Saturday at Lynn Family Stadium to advance.

They only prevailed by a 2-0 score after a wacky first half sequence that saw a Saint Louis FC penalty turned away, a LouCity goal, and a subsequent score disallowed for the visitors — all in a 10-minute span.

Ultimately, forward Cameron Lancaster’s 18th-minute goal proved enough, and LouCity doubled its lead in the 83rd on a set piece goal accidentally directed into the net by a Saint Louis FC defender.

LouCity as a result will host the Tampa Bay Rowdies, a 1-0 winner Saturday over the Charleston Battery, at 7 p.m. Oct. 24. Season ticket members have been notified via email of how to opt into tickets; what remains will go on sale to the public at 10 a.m. Tuesday.

“That was a ridiculous sequence of emotions," said LouCity coach John Hackworth, looking back at Saturday's minutes 11 through 21. "...It was a strange game to start that way, but give our guys a ton of credit for finding that first goal, for staying after it, for in the face of what could’ve turned into some crazy emotions cooler heads were prevailing.

LouCity upped its unbeaten streak to 13 games and winning streak to eight, both the longest of any pro soccer clubs this year in America, by knocking off Saint Louis FC in its Kings’ Cup rival’s final game. The club is folding as Major League Soccer enters its home market.

Another LouCity streak paved the way for the result. Lancaster has now scored seven goals in as many games after Antoine Hoppenot looped in a cross, the striker used one touch to gather it and then another to finish.

Voted Man of the Match having made nine saves, goalkeeper Ben Lunt also made a massive impact Saturday. He was called into action most notably for a 12th-minute penalty kick after LouCity defender Sean Totsch took down Saint Louis FC’s Tyler Blackwood in the area.

Wal Fall stepped up to try the penalty for the visitors, and Lundt lunged to his left to preserve his USL Championship-leading ninth shutout.

"Scott Budnick, my goalkeeper coach, has been doing a really good job of scouting other teams and I watched a couple of penalties from a couple guys before the game," Lundt said. "...We discussed it as a group, and we decided before the game if he is coming up for a penalty that I would be going to my left.”

Meanwhile, Saint Louis FC did see two shots hit the back of the net. Neither, however counted, as a 21st-minute free kick and 87th-minute goal were both disallowed due to offside.

Lundt was a wall when it came to most other opposing chances. He got a massive lift, too, when defender Oscar Jimenez cleared a would-be goal off the line in the 85th minute. Lundt had already made a save earlier that possession, the story of the night for the native of Germany on loan from Major League Soccer’s FC Cincinnati.

LouCity tied a bow on its Saint Louis FC series with three consecutive shutouts — score lines of 3-0, 1-0 and now 2-0. The clubs kicked off their inaugural game against one another with a LouCity win in March of 2015 that set the rivalry’s tone.

In this final meeting, LouCity controlled 54% of possession and absorbed a motivated Saint Louis FC side’s offense — 17 shots, 13 inside the box and 10 of them on target.

"Every time we play them I think that they make it really tough on us," said the LouCity midfielder Hoppenot. "I thought we came out here trying to use the bigger grass field to our advantage to try to tire them out a little bit and kind of use their excess energy against them. Honestly, to their credit they didn’t really tire out. Even at the end they’re still flooding, working hard and still making our lives miserable.

"Unbelievable club by them. They have had a great year and honestly, we’re glad that we won obviously. It was a tough game and was not an easy one and I think the celebration in the locker room a little bit exemplifies that — the fact that it wasn’t easy at all today."

After the final whistle, a group of green- and blue-clad supporters in the west corner of Lynn Family Stadium celebrated their players on last time. It was an inevitable result when up against a LouCity side that never falls short of the Eastern Conference Final.

"There are not many sports that you can look at around the globe where a franchise is as successful as Louisville City has been," Hackworth said. "It’s not easy, and you can see that from tonight. It’s an impressive stat, and I’m so happy for the players in that locker room.

"Most of them have been here for multiple trips to the Eastern Conference Final. Niall (McCabe) has been to all six and also thinks that it’s just normal and that’s what we do. I guess he’s right. It’s not easy, and I know that there’s a couple teams that have done it in other sports, but it’s extremely tough, especially in soccer.”

Man of the Match: Ben Lundt

18’ Cameron Lancaster right footed shot from the right side of the six-yard box to the center of the goal. Assisted by Antoine Hoppenot with a cross.

83’ Own Goal directed in by Tobi Adewole off a LouCity set piece.