The midfielder has recovered from a late season ankle injury to get back on the pitch. 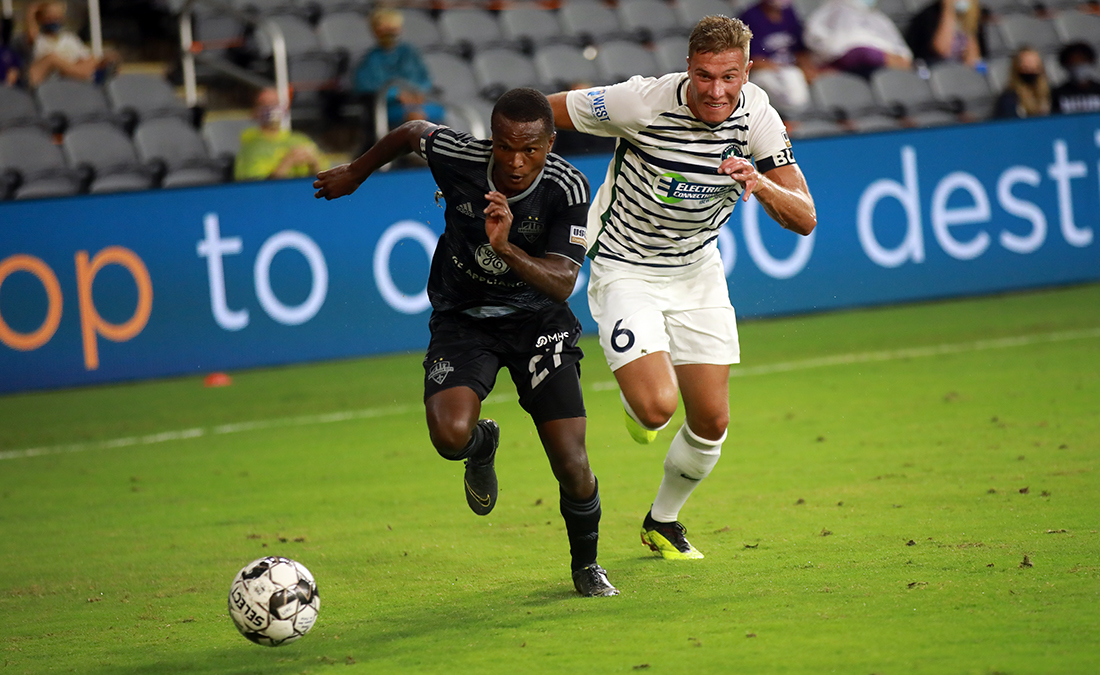 Overlooked as Louisville City FC celebrated a Sept. 16 away victory over the Indy Eleven was a late-game sequence that saw Napo Matsoso raked across his Achilles by an opposing player.

Diagnosed as a high ankle sprain in the ensuing days, the injury kept the winger Matsoso, a crucial piece of the club’s burgeoning unbeaten streak, sidelined down the stretch of the USL Championship’s regular season.

Matsoso, however, returned to the pitch last weekend when LouCity defeated Pittsburgh Riverhounds SC in an opening-round playoff game. And he’s pushing for playing time again as the boys in purple prepare to host rival Saint Louis FC at 7:30 p.m. Saturday in an Eastern Conference Semifinal.

“Napo has been huge for us, especially in August and into September,” said coach John Hackworth, who midseason shifted the University of Kentucky product from the central midfield to the right wing, where he has excelled.

“…Napo has so much versatility that we can play him in five different spots. He’s a good attacking player but he’s also good defensively as well. He’s just a good all-arounder. It’s a definite bonus for us to have him back and have him available for selection.”

LouCity, of course, restarted its campaign by going 1-3 in July, finding itself at the bottom of Group E. Matsoso’s move to the wing saw him score three goals and register two assists; it also coincided with the start of his club's current unbeaten run of 12 straight games.

Matsoso said it’s easier to lose fitness while sidelined than gain it by returning. He mentioned extra walks, jogs and bike rides away from the training pitch to get himself game-ready in the interim.

“It feels great, and I am glad that I am able to come back during this time,” Matsoso said. “Hopefully, I can continue to help the team as much as I am, but it feels great. I’ve gotten a lot of push from the training staff to get me to where I am now and I’m getting a lot of help from my teammates.

“I was out for three weeks, and I missed a lot of stuff that we do in training, but I am working my way up to get into full fitness so hopefully we can continue to win.”

Even with the time missed, Matsoso’s 1,018 minutes played ranked prominently among all LouCity players. He subbed on for Antoine Hoppenot in the 66th minute of the Pittsburgh win, tallying 18 touches, plus winning a tackle and a foul for the boys in purple.

When LouCity meets Saint Louis FC for a fifth time this season — winner goes on to the Eastern Conference Final — there will be few surprises left to offer on either side.

Matsoso’s new role to begin August did catch opponents on their back heel, as he’d previously featured in a position group now firmly occupied by Paolo DelPiccolo and Corben Bone. One unknown left is who will feature on the right wing, with Brian Ownby filling in with aplomb, running his assist total to five during Matsoso’s absence.

“It’s a good and a bad thing,” Matsoso said of seeing Saint Louis FC again. “We know each other pretty well, so we know what Saint Louis is capable of. They already beat us one time at home this year, so we can’t take anything for granted. We need to come out with the same mentality that we’ve been coming out with during the previous games and make sure to match the intensity.

“They’re a really good team and I’m sure they will be very motivated to come here and get the win. It’s not going to be easy. We’ll fight as much as we can, so it’ll be a good test.”