Preview: What to watch for with LouCity vs. Pittsburgh

The playoff opener kicks off at 7:30 p.m. Saturday inside Lynn Family Stadium. 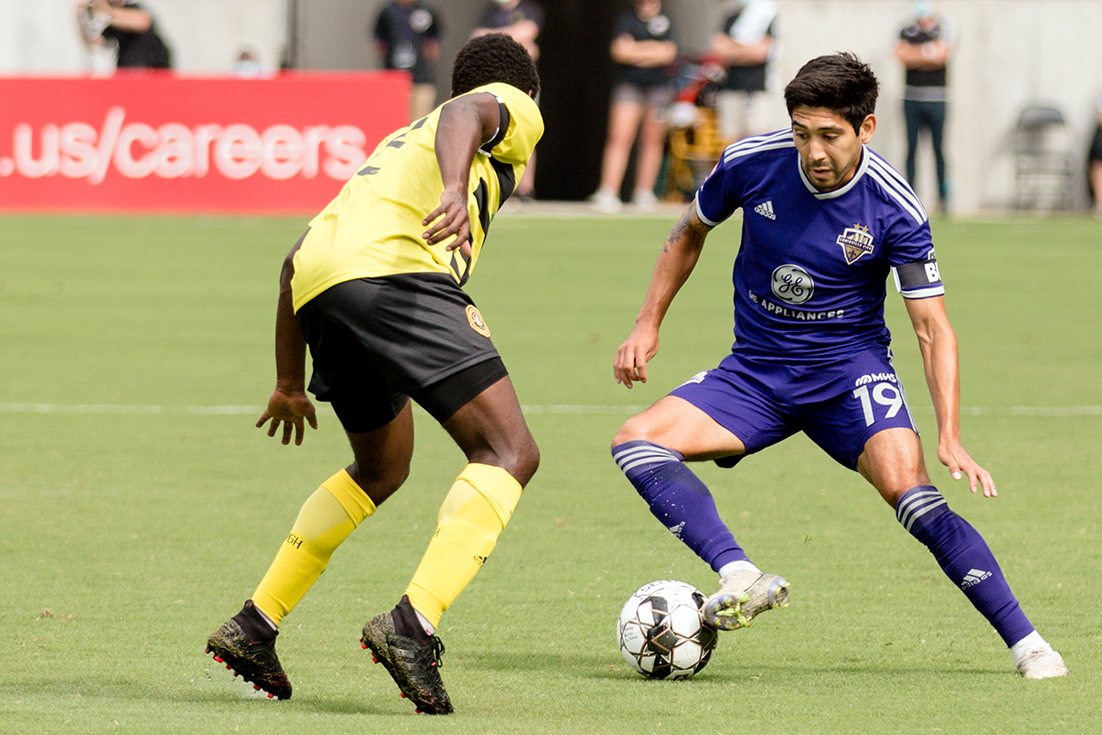 You may hear those words thrown around a bit leading up to Saturday night. They certainly fit.

In Louisville City FC’s five-year playoff history, the boys in purple have each season advanced as far as the Eastern Conference Final. The last three years, they’ve played for the title. In 2017 and 2018, they won it.

This time through the postseason, FiveThirtyEight.com rates LouCity with a 57% chance of advancing Saturday, a 44% chance to play for another Eastern Conference Final and a 29% chance of making the championship game again.

That’s due to how the boys in purple finished out their 2020 campaign, running through 11 games unbeaten as they ascended from the bottom of Group E to the top.

What’s alarming, however, is No. 1-seeded LouCity’s first-round opponent, Pittsburgh Riverhounds SC, ranks second among Eastern Conference squads in FiveThirtyEight.com's projections. The Riverhounds have won six of their last seven games, just missing out on the No. 1 seed from their own group behind a surging Hartford Athletic side.

LouCity and Pittsburgh also met in the 2019 playoffs, when the boys in purple prevailed. The ‘Hounds exacted revenge July 12 upon the USL’s restart, spoiling Lynn Family Stadium’s debut game by a 3-1 score.

This most-recent clash comes as a product of regionalized scheduling amid the COVID-19 pandemic, making LouCity-Pittsburgh the weekend's marquee USL game.

“They added a few players since the last time we saw them. They’re playing a little bit of a different system and they continue to be a good team. I have a ton of respect for the way that they compete and their culture. Their coach does an outstanding job from a tactical perspective. They’re always ready to compete. For sure we’ve had some really good games against them since I’ve been here. Last year’s Eastern Conference Semifinal is a great example of that. We host this time, and we’re looking for the same outcome.”

LouCity: Cameron Lancaster, the USL’s 2018 Golden Boot winner, has returned to that type of form toward the end of this season while accounting for five goals and an assist over LouCity’s final five games. On the year, Lancaster ranks fifth in the USL championship with 10 goals scored and leads the league in shots taken at 52. Going back two seasons, Lancaster earned an MLS contract with Nashville SC — he’s back here on loan, of course — by scoring once every 80.8 minutes, hitting the back 25 times during the 2018 regular season.

Pittsburgh: Defender Thomas Vancaeyezeele, a French Guinean international, played every minute of the Riverhounds’ 16-game regular season on a back line that conceded a club-record 0.63 goals per game. Vancaeyezeele, voted all-league in 2019, has established himself in coach Bob Lilley’s system and can get active in the offense as well, scoring in an Aug. 1 victory over Philadelphia Union II.

Playoff picture: LouCity, which won the USL’s Group E, is hosting Pittsburgh, the 2 seed from Group F. The winner sees the advancing team from the corresponding Group F No. 1 (Hartford Athletic) vs. Group E No. 2 (Saint Louis FC) game kicking off at 7 p.m. Saturday. From there, the winner of this regional pod matches up with the top side out of Group G/H for the Eastern Conference Final. The USL Cup Final pits the top team from the East against the West’s winner.

National spotlight: For the first time, it was announced this month, the USL Championship Final will get the ESPN treatment. The game will air at 8:30 p.m. on Nov. 1 after a trio of preceding playoff rounds. LouCity’s on Saturday looking to advance to the conference semifinals (Oct. 16-18) and conference finals (Oct. 23-25). The boys in purple have appeared in three straight USL finals, winning titles in 2017 and 2018.

A streaking side: Each season in LouCity’s John Hackworth era, the coach has led his squad through a 10-game unbeaten streak. This year’s run extended to 11 games without a loss as the boys in purple concluded the regular season last weekend with a 2-1 win over Sporting KC II. The only longer undefeated streak in club history was a streak of 17 games in 2016. Throughout this current run of form, LouCity hasn’t allowed more than a goal in a game while outscoring opponents by a combined 23-6.

Productive Paolo: Team captain Paolo DelPiccolo has moved up within LouCity’s offense since the USL restart, roving from the central to attacking midfield. The shift has led to two goals for the veteran out of the University of Louisville, including the game-winner in last weekend’s regular-season finale when DelPiccolo directed a header toward the back post against Sporting KC II. DelPiccolo also won three of his five aerial duels last weekend to lead LouCity.

Own-ing the spotlight: An ankle sprain has slowed winger Napo Matsoso in recent games, making way for Brian Ownby’s return to the starting 11. Ownby, known for his pace on the right side, is filling in well. In addition to looping a cross into DelPiccolo for an assist against SKC II, the Virginia product curled in a beauty of a goal to go with an assist Sept. 19 against Memphis 901 FC. Matsoso is expected to be available Saturday, making for a tough decision on who to play.

Getting his goals: Devon “Speedy” Williams has defined himself professionally with swift feet and accurate passing out of the central midfield. He’s added himself as a goal scoring threat in 2020, too, by hitting the back of the net four times, including the game-winning header against Saint Louis FC off an Oscar Jimenez corner kick. In previous seasons, both with New York Red Bulls II and LouCity, Williams tallied one goal each regular season.