Totsch's LouCity-themed proposal: 'What better way to show who I am?'

The defender got down on one knee before kickoff Saturday night. 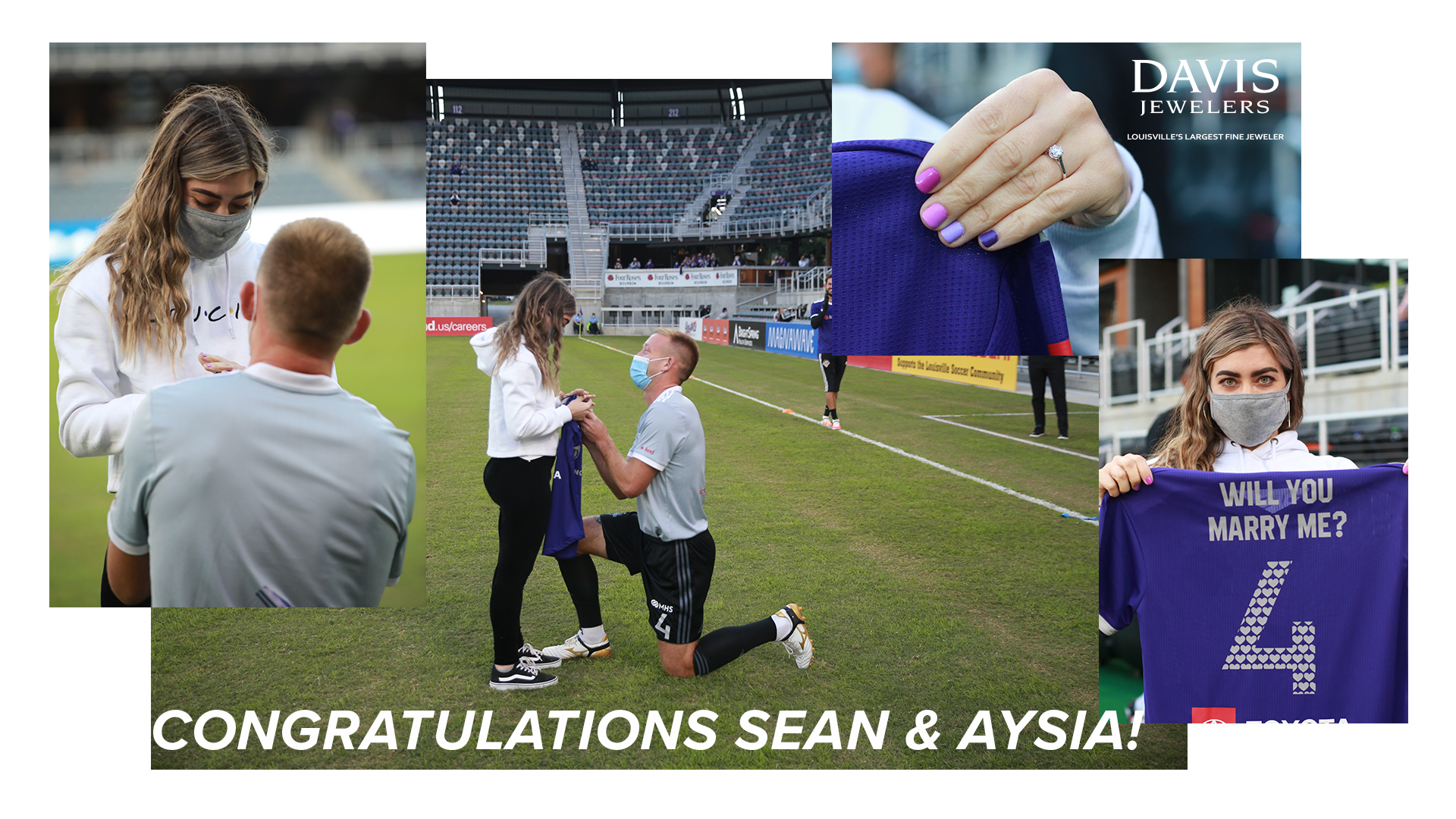 Having spoken to others who had proposed to the love of their lives, Louisville City FC’s Sean Totsch set out to make his own moment “something that represents you and who you are.”

That led Totsch to take the field for warmups Saturday night with some extra equipment — a ring from Davis Jewelers — and a well-crafted idea to surprise his girlfriend, Aysia.

Aysia thought she was heading to the field to present Totsch with a commemorative jersey before LouCity’s regular-season finale. The mainstay defender surpassed 100 appearances with the club this year amid a stint that has included multiple USL titles.

But when the kit was revealed, the back of it instead asked, “Will you marry me?” She said yes with family members from both sides on hand at Lynn Family Stadium. Totsch’s teammates and coach John Hackworth were nearby as well for a memorable moment preceding a 2-1 victory.

“I’m thankful that he looped me into that,” Hackworth said. “That was quite an occasion. I just told the boys, ‘We all had a great night. We won the Eastern Conference’s regular-season championship. Totsch had an unbelievable night — gets engaged to the love of the life.’

“I thought it was great that his idea was to include all of us and that he feels so strongly about this being part of his family that he wants us to be there.”

Totsch, who signed with LouCity in 2017, reminded after the game that he’s “laying down roots” in Louisville. Going on four seasons complete in Louisville, he’s bought a home here and talked about wanting to start a family.

Another box was checked Saturday night when he got down on one knee.

“The biggest thing for us is just the group, the culture and everyone being there for each other no matter what on the field or off the field,” Totsch said of LouCity. “I think you see how close we are together on the field. That is a big reason why we have been so successful in the past and throughout the regular season is because we are such a close-knit, good group of guys. It means a lot for me to share it with my close friends and teammates.

“… I love this city. I love this team, and what better way to show who I am than doing it here?”

It reflects the type of season Totsch is having, and his current confidence level, that he’d propose before a game the boys in purple very much needed to win. While they’d already locked up a No. 1 playoff seed, a victory could guarantee more home games throughout the postseason.

LouCity carried a 2-0 lead into halftime, with Sporting KC II’s 64th-minute answer not enough to even the score. About the only thing that didn’t go right for Totsch was a header in the 82nd minute that came so close to hitting the target it grazed top netting.

“It would have been the perfect night if I scored,” Totsch said with a smile.

Saturday still came close to that as, in a typical Totsch performance, the Illinois native went the full 90 minutes, completing 90% of his passes while leading the boys in purple in interceptions (3) and clearances (1).

Totsch has had an exemplary season at center back, where his 1,245 minutes played rank third on the team. He’s been a key piece to a stingy defense that since the calendar turned to August has allowed just six goals in 11 games, none of them defeats for LouCity.

“Any night I’m just out there having fun, and that is what I’ve felt this year,” Totsch said. “I feel lucky to be playing in this beautiful stadium with this group of guys. They make my job easy in the back a lot of times, and then to be able to have that moment and share it with the fans who mean so much to me and also my family and her family. All of that put together, the win and to win the Eastern Conference regular-season – it is a beautiful night.”