LouCity locks up No. 1 playoff seed with win over Saint Louis FC

A Devon "Speedy" Williams header made the difference in a gritty road win. 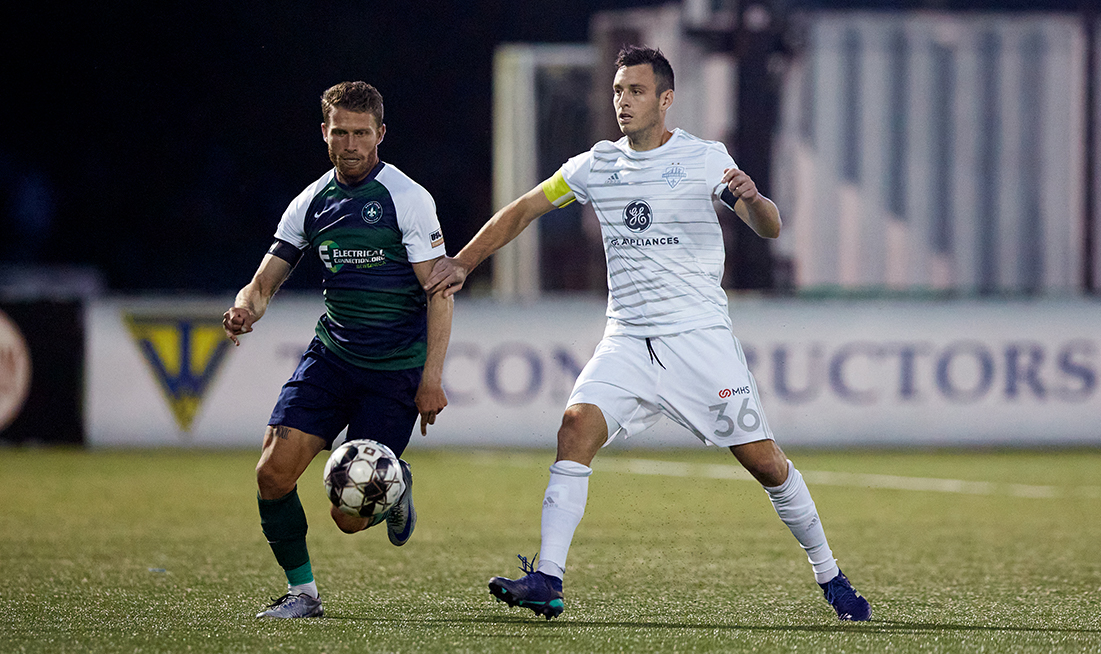 Louisville City FC on Saturday locked up a No. 1 USL Championship Playoffs seed while positioning itself to carry the Eastern Conference’s best overall record into the postseason.

In a likely last-ever matchup with rival Saint Louis FC, Devon “Speedy” Williams headed in a corner from Oscar Jimenez that made the difference in a 1-0 victory at West Community Stadium in Fenton, Mo.

"You’ve got to give Saint Louis a ton of credit," said LouCity coach John Hackworth. "They made it really hard on us and competed for everything. At times, we are the better team in that regard, but to come here and for Oscar (Jimenez) to get an (assist) and then to get a shutout with a little bit of craziness mixed in there was important for us."

The victory pushed LouCity to 10-3-2, with its 32 points an insurmountable number for any USL Group E foes. That ensures the boys in purple will host an opening-round playoff game — time, date and ticket details will be announced later — between Oct. 9-11.

Eastern Conference positioning will impact whether LouCity hosts beyond the first round, as home games are awarded to teams sporting the better record. Other results were pending Saturday as LouCity moved one point clear for first in that category.

"I’m really proud of the team," Hackworth said. "I don’t love the performance on how it looked necessarily, but it’s really important. It keeps us on track to reach the goals that we’re trying to reach — secures first place in group E — so now we have a home playoff game. Again, we are moving in the right direction.”

Williams’ 44th-minute winner came bit of a surprise near conclusion of a first half in which the visitors out-possessed Saint Louis FC, controlling the ball for 63.2% of the going, but were out-shot 12-4 by the home side.

After the boys in purple won a corner, Jimenez looped in a ball Williams had to merely redirect with a header to score. It marked Williams’ fourth goal of an abbreviated season and the first assist for Jimenez, who since signing with LouCity in 2017 has led the club in that stat.

“I think they had ahold of the game in terms of energy and we weren’t able to match it at times," Jimenez said. "I think that goal gave us a little breather, and it was huge because I think it was our first (corner kick) goal. ...It definitely turned the table for us and calmed us down a bit.”

A physical but ultimately uneventful second half led to a result plenty important within this series. The fourth meeting this season between LouCity and Saint Louis FC awarded the Kings’ Cup — a supporter-created trophy recognizing the rivalry — to LouCity’s fans.

There the Kings’ Cup will stay. Saint Louis FC will fold at year’s end, making way for a new Major League Soccer franchise within its market.

"I think it puts us in a good spot — in the driver’s seat in terms of we want to host," midfielder/forward Hoppenot said of Saturday's result. "We want to play at home. They built a great stadium for us. The least we can do is try to get as many home games as we can."

LouCity used a bit of good fortune in extending its unbeaten streak to 10 games, matching the longest of the coach John Hackworth era. Saint Louis FC hit the back of the net in both the 14th and 21st minutes, but both were disallowed due to offside calls.

In 2018, the club parlayed a double-digit run of games without a loss into a USL title; in 2019, the boys in purple repeated the streak and returning to the playoff final.

The 2020 bracket will be finalized after next weekend’s regular-season finales. LouCity closes Saturday against Sporting KC II at Lynn Family Stadium.

Louisville City FC: 43’-Devon Williams header from very close range to the center of the goal. Assisted by Oscar Jimenez with a cross following a corner.