Kernen: The (almost all) good from LouCity's win over Memphis 901 FC 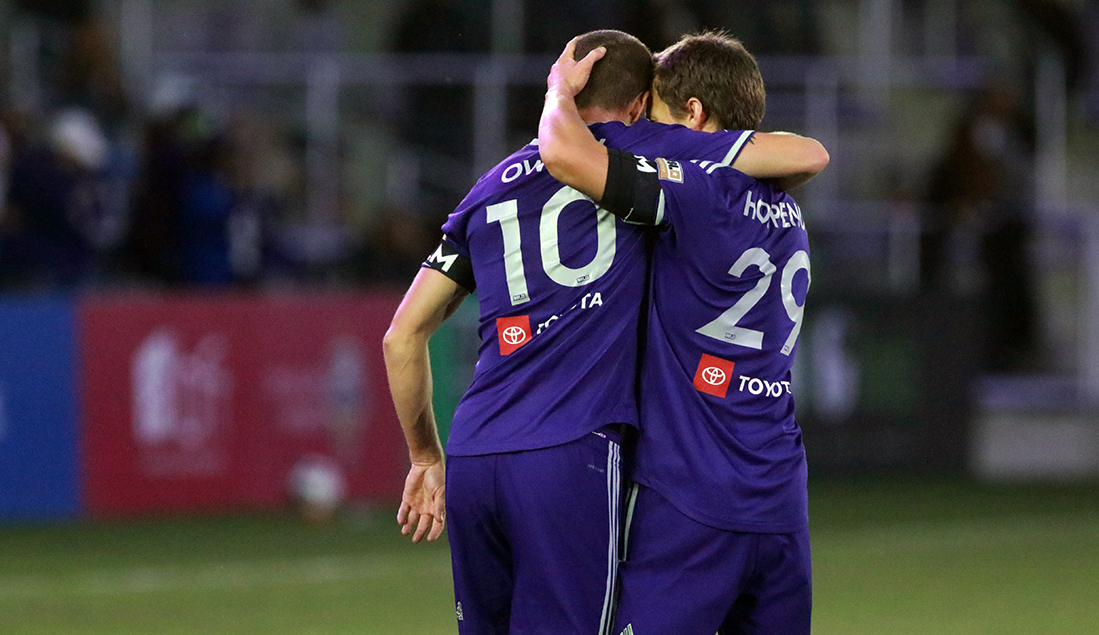 It was another bumper night for Louisville City FC at Lynn Family Stadium on Saturday as the club all but officially clinched a playoff spot while hanging four goals on visiting Memphis 901 FC. The names on the scoresheet were familiar, but one player in particular played his best game of the season for LouCity.

Here is what I thought went well, along with what went very slightly wrong.

It was a classic Brian Ownby night on Saturday with a performance that had yet to be seen in the 2020 USL Championship campaign for the fan-favorite winger. A goal to go along with his assist to Cameron Lancaster was not enough to earn him the Man of the Match nod, but it did garner some praise from coach John Hackworth.

Ownby joins players such Corben Bone, Antoine Hoppenot and Alexis Souahy to find their form later on in the season. Ownby is just the latest LouCity player to get in the goals, but more than his stats for the game, he ran his socks off for the entirety of the match.

Runs in the 52nd and 82nd minute in particular come to mind. On both occasions, the Virginian just refused to give up on the play. In really good teams, there are multiple starting-quality players at each position, and although Napo Matsoso may still be the first choice for the spot, expect a contribution from “Playoff Ownby” in the few remaining games this season.

Lancaster involved in the buildup

While, again, Ownby did not earn the Man of the Match award, forward Cameron Lancaster was about the only player that could be argued had as good of a game as the LouCity number 10. The Englishman scored multiple goals for the first time this season, but more encouraging than that was the fact that Lancaster involved himself in build-up play.

Rather than just sitting up top and expecting service in, he dropped back on defense and helped win the ball for his team. LouCity is a team that defends with 11 players, which includes the striker getting back to take a little pressure off his teammates, and while that has not happened in every game this season, it did here.

Lancaster was involved in intercepting a ball, passing to Ownby and receiving a cross in the box that led to the first goal. He also found himself well positioned for the late, back-heeled goal on the rebound, helping create both his chances before finishing them.

LouCity managed to dodge the phenomenon that affects teams in a unique circumstance: the new manager bump. In short, teams generally see an uptick in performance after a new coach comes in, and that is where Memphis 901 FC found itself on Saturday.

Although interim coach Ben Pirmann was the assistant coach under since-dismissed Tim Mulqueen, there is no way of knowing what sort of system or formation the team would assume. LouCity responded to the unknown by holding more than their normal amount of possession, with the percentage north of 70 at one point in the first half.

Although City will have game film on whomever they play, some potential playoff opponents will not be nearly as familiar as members of Group E have become, so the ability to dictate possession in this scenario is encouraging.

It wasn’t by design, Hackworth said, that amid a lengthy unbeaten streak the boys in purple actually became that once again. They had been wearing black at home since the beginning of August, but Hackworth cited a surprising decision by a member of the backroom staff to go with the more traditional color.

It marked the first time LouCity played in purple at home since a July 18 loss to Saint Louis FC. Hackworth, a superstitious type, expressed concern about the oversight in his postgame comments, but they weren’t all fit to print. The matter does go some way to eliminating any number of variables that might impact on-field performance, though.

And so we add kit color preference to Hackworth’s superstitions such as dining on a game day quiche or using a particular pen. Whatever works on nine games unbeaten.

263 minutes without conceding a goal came to an end

In the form that LouCity’s in at the moment, there is not a USL Championship club that can come to Lynn Family Stadium and dominate a game. The game here was surprisingly never really even, as either City was unbalancing Memphis, or they were playing around Louisville.

The visitors made some corrections, however, after the first half water break stoppage. Memphis scored right before the halftime interval and came out from the locker room looking as dangerous as it did all night. The game got a bit nervous over the first 15 or so minutes of the second half, but the game’s next goal was always more likely to LouCity’s third rather than an equalizing second for 901 FC.

The water breaks need to go. They were implemented in the middle of summer for teams at various levels of fitness to return to play safely, but we are long past that. The amount of goals, both for and against City, that stem from a coach giving his players instructions during the game is inordinate. It can eat up momentum for some teams and provide a reprieve for others. Yes, both teams get them, but there is certainly no need for them with the temperatures this time of year.

No soccer fan is a fan of stoppages in play, and this is an artificial one that impacts sporting results.

The game on Saturday was great, but it was against a team that is not going to the playoffs. LouCity itself is now all but assured a spot in the postseason, though, and shows no signs of slowing down. There is still an away game at Saint Louis FC to contend with next weekend which represents a bit of unfinished business for the team, who were not satisfied with their draw last time there and can outright take the Kings’ Cup over the rival.