Preview: What to watch for with LouCity at Indy Eleven

The fourth (and final) meeting between these rivals could determine first place. 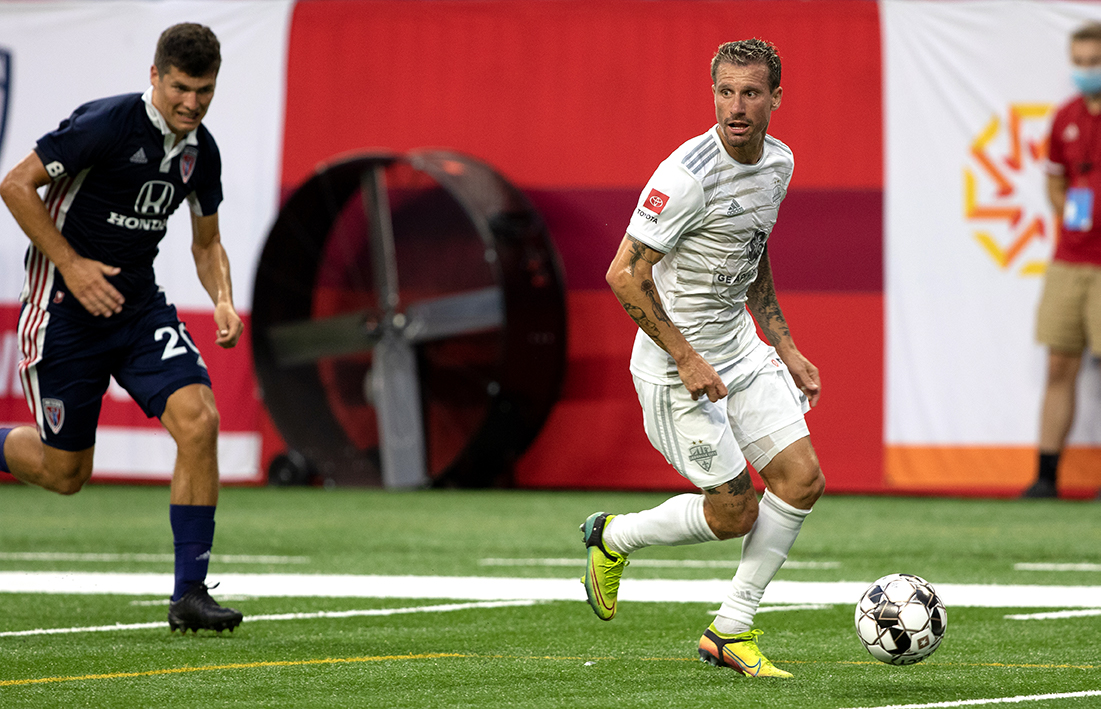 They’re not our words but those of Kevin Johnston reporting for the Indianapolis Star after Louisville City FC on Sept. 5 handed Indy Eleven a 3-1 home defeat:

“Indy Eleven and Louisville City FC has evolved into kind of a – dare anyone say – little brother versus big brother rivalry.”

LouCity will be out to keep a series known as the Louisville-Indianapolis Proximity Association Football Contest lopsided when the clubs meet for a fourth and final time this regular season at 7 p.m. Wednesday inside Lucas Oil Stadium.

The boys in purple are 6-2-4 across all competitions against this foe having not lost to the Eleven since May 5, 2018, the same year Indy entered the USL Championship (prior meetings came in the U.S. Open Cup).

Wednesday’s matchup is again on a big stage in the USL playoff race. With last Saturday’s 3-0 win over Saint Louis FC, LouCity (7-3-2, 23 points) once again surged past Indy Eleven (7-4-1, 22 points) for first place on the Group E table. Four games remain in the regular season, and the top two in each USL pod advance to the playoffs.

For now, there’s breathing room back to Saint Louis FC (5-4-3, 18 points) in third. All three clubs within sight of a postseason bid have games remaining to play against each other.

According to FiveThirtyEight.com, LouCity now has a 97% chance of making the playoffs and 61% chance of finishing atop Group E. Indy Eleven, whose respective numbers are 90% and 36%, will be out to change that Wednesday.

In terms of clinching a postseason spot, the boys in purple need to accumulate eight points, though that number’s subject to shrink as Saint Louis FC’s points ceiling decreases.

“A lot is still to play for. At the moment, we’re fighting for first in our division, which gives us a better path to the playoffs. I can imagine (the Eleven) don’t feel good about the three-game series so far, so we’re going to get their absolutely best on Wednesday. They’re a little rested. We’re coming off a game on Saturday night. There’s a lot of situations going into this game. No matter how it shakes out, I know both teams are going to play extremely hard. It’s going to be a tough one to see who’s trying to take that first spot in the group.”

LouCity: Antoine Hoppenot found himself at the top of a new-look 3-5-2 formation Saturday against Saint Louis FC and made for a productive pairing with Cameron Lancaster. Hoppenot netted his first goal of the season in the 28th minute, then delivered his team-high fourth assist to Lancaster in the 44th. Hoppenot knocked on the door of scoring with two point-blank misses earlier in the month at Indy before finally splitting the posts against Saint Louis FC.

Indy Eleven: Whether by design or because of injury, Indy’s leading scorer, Tyler Pasher, missed his club’s last game, a 2-1 win Sept. 9 over Sporting KC II. In his place, forwards Jeremy Rafanello and Nick Moon made a statement by both scoring, diversifying the Eleven’s attacking options. Moon, who transitioned from USL League One’s Lansing to Indy this season, made it his second goal of the year. Rafanello, only 20, is also in his first season with the club.

On the WMYO (My TV)/ESPN+ streaming call: Mike Watts (play by play) and Devon Kerr (color).

And for AM 790 WKRD and SiriusXM FC on the radio: Clay Ables (play by play) and Jeff Greer (color).

Tracking Group F: No. 1 and No. 2 seeds from the USL’s Group E and Group F will converge to open the single-elimination playoffs. Pittsburgh Riverhounds SC (9-3-1, 28 points) is the first Eastern Conference club to clinch a postseason bid and trending toward top-seeded status after rolling to a 5-0 win Saturday over second-place Hartford Athletic (6-3-1, 19 points). It’s another seven points back to New York Red Bulls II in third.

In the wings: LouCity’s seven-game unbeaten run has coincided with a position swap that sent Napo Matsoso from the central midfield to the outside attack. Matsoso, a native of Lesotho who starred for the University of Kentucky, has scored three goals and assisted two others since then. His high energy and skill on the ball continues to frustrate opponents, as against Saint Louis FC he tallied 88 touches and completed 84% of his 44 passes in the opponent’s half.

Spreading purple: LouCity was without two veteran contributors last weekend, but for good reason. Forward Luke Spencer and his wife, Kristen, welcomed to the world Emory Christopher. Defender Pat McMahon, meanwhile, is a newlywed to his wife, Brianna. And so the LouCity family continues growing.

A streaking side: LouCity’s run of seven games without a loss is hardly unprecedented in club history. Last season, coach John Hackworth’s team went from August to early October unbeaten, totaling 10 games. A 10-game unbeaten streak also closed out the 2018 championship run. And going back to 2016, then under James O’Connor, the club went 17 straight games undefeated from April to mid-July.

Tone setters: Only once during this unbeaten run has LouCity failed to score in the opening half hour. That exception, on Aug. 26 against Indy Eleven, Paolo DelPiccolo crashed the box for a 62nd-minute game winner in a 1-0 win. Given hot starts, the boys in purple haven’t played from behind since July, also seeing goal contributions for the first time from Corben Bone (3), Napo Matsoso (3), Jason Johnson (1), Antoine Hoppenot (1) and Sean Totsch (1).

The back line: LouCity goalkeeper Ben Lundt ranks second in the 35-team USL in clean sheets with five, one back of the Tampa Bay Rowdies’ Evan Louro. At the same time, a sturdy defense by the boys in purple have limited Lundt’s workload. The FC Cincinnati loanee’s 23 saves rank 18th in the league and are 26 fewer than Charlotte Independence keeper Brandon Miller, who tops the list.