'It was a big goal'; Hoppenot savors his breakthrough moment

Moved atop LouCity's formation, the midfielder/forward ended frustrations with a game-winning strike. 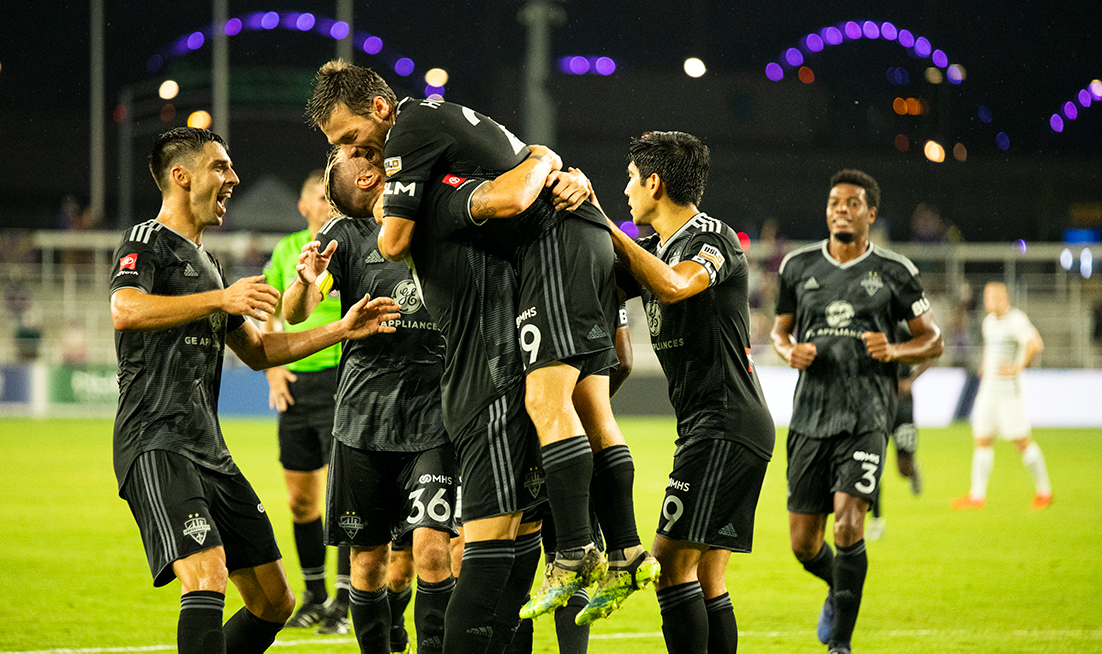 Louisville City FC midfielder Antoine Hoppenot found himself in a striker’s role Saturday night — that despite not having scored a goal since the USL Championship restarted play in July.

A somewhat frustrating run for Hoppenot included two point-blank misses a week ago in a 3-1 win over Indy Eleven, with those just a pair of his six attempts on goal in 2020. The breakthrough moment arrived, however, as Hoppenot assumed a spot on top of the attack in a new-look, 3-5-2 formation.

Hoppenot scored a goal and added an assist in an all-around top effort, propelling his side to a 3-0 win over Saint Louis FC at Lynn Family Stadium.

“It was a big goal,” Hoppenot said of his 28th-minute strike, the game’s first scoring tally. “More than anything it just gives us the ability to win the game. All season it doesn’t really matter who is scoring as long as we’re winning and the last several games, we’ve been winning. That is what matters.

“Obviously, I missed a couple of big chances last week, so it was good to finally put one in the back of the net so I can show my teammates I can actually score a goal.”

Hoppenot lined up beside LouCity’s leading scorer, Cameron Lancaster, on top of the formation. In the 44th minute, Hoppenot dribbled deep into the box and this time dished to his fellow striker, who put a rocket of a shot into the back of the net to double the LouCity lead.

That added to an evening in which Hoppenot also launched a shot off the side netting, created three scoring chances in all and passed with 68% accuracy in his opponent’s half of the pitch.

“When we put Antoine and Cam together those are two attacking players that work off of each other,” said Louisville City FC head coach John Hackworth.

“What Cam does really well and having Antoine run off of that, there’s a little bit of yin and yang there. That’s a special relationship and combination that you want and I’m happy for him for sure.”

A native of Paris, France, Hoppenot was in 2012 selected No. 51 overall by Major League Soccer’s Philadelphia Union, making him plenty familiar to Hackworth, who coached there at the time. Hoppenot spent on to spend time with FC Cincinnati, Reno 1868 and the Tampa Bay Rowdies before Hackworth executed a trade bringing him to Louisville midway through the 2019 season.

Hoppenot quickly proved himself an offensive asset with five goals, third-most on the team. His late playoffs strike at Indy Eleven also wrote him into LouCity lore, with the goal helping send the boys in purple to extra time and eventually on to another Eastern Conference final.

As for the 2020 version of Hoppenot, “He’s been working hard and has been getting a lot of chances for us, assists and giving defenders a lot of hell,” said LouCity midfielder Devon “Speedy” Williams. “It felt good seeing him get that one tonight.”

Hoppenot’s outburst Saturday gave LouCity its first win of the season in its third meeting with Kings’ Cup rival Saint Louis. Prior results were a 1-0 defeat and a 1-1 draw, setting up a pivotal final meeting between the clubs later this month.

Additionally, the win boosted LouCity’s point total one beyond Indy Eleven, good for first place in the USL’s Group E ahead of another meeting between those rivals at 7 p.m. Wednesday in Indianapolis.

For all of that, the boys in purple have the new formation — and Hoppenot’s execution within it — to thank.

“We wanted to throw something different at them especially early on,” Hoppenot said. “Cam and I have been working really well together at practice so we wanted to see if we could isolate their two center backs.

“Obviously, we were able to create a little bit of space and able to get my goal – Speedy finds me with an unbelievable ball that is easy for me to finish and then Cam does a great job the second one to get us a second goal.”

“We don’t change our principles at all and how we do things, but when we line up our starting positions are a little different,” Hackworth added. “I think that gave them some trouble.”