Antoine Hoppenot's attack came alive in an altered formation for the boys in purple. 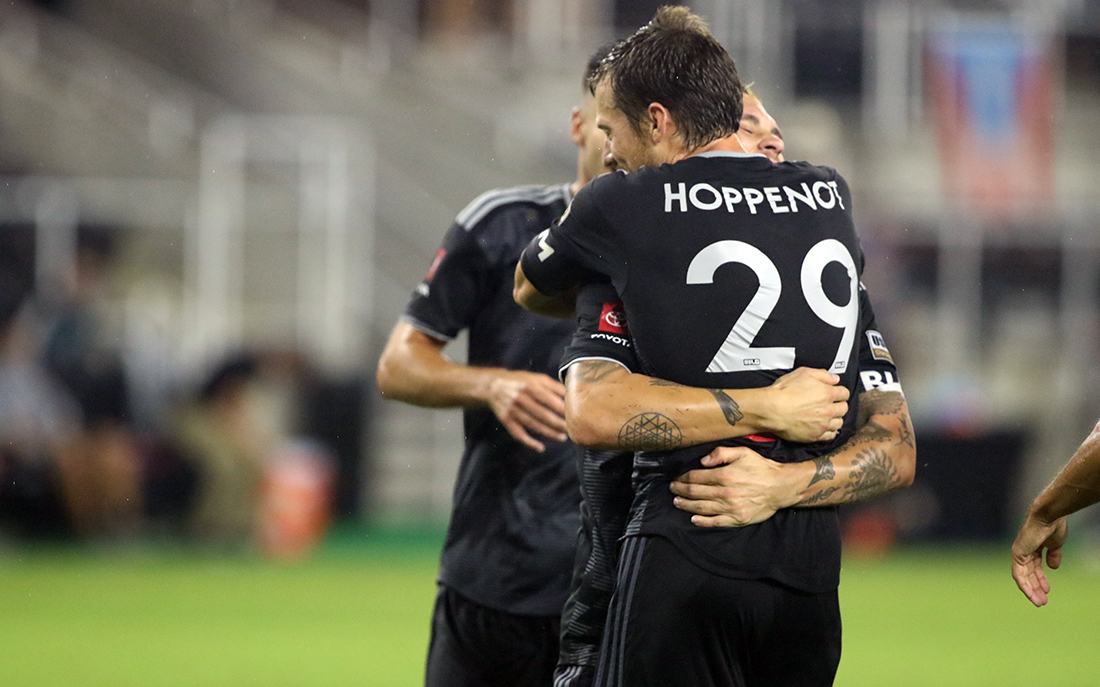 Said changes may have unlocked the opposition Saturday night at Lynn Family Stadium, where midfielder Antoine Hoppenot moved to the top of a new formation then registered a goal and an assist in a dominant 3-0 victory.

LouCity (7-3-2, 23 points) made it a seventh straight game unbeaten, returned to the top of the USL’s Group E table and advanced its cause toward winning the season series over Saint Louis FC (5-3-3, 18 points) as a result.

"We rolled out (assistant coach) Danny Cruz’s favorite formation finally," said LouCity head coach John Hackworth. "He’s been talking to me for years about trying to play a 3-5-2 and it just felt like tonight was the time. We thought we could get at them out of that formation.

"We don’t change our principles at all and how we do things, but when we line up our starting positions are a little different. I think that gave them some trouble.”

Typically lined up with four defenders in the back, the boys in purple transitioned to a 3-5-2 look at the opening whistle, pushing Hoppenot up beside regular starting striker Cameron Lancaster. The two at the top made for a productive pairing.

As LouCity controlled the balance of possession, scoring opened in the 28th minute when midfielder Devon “Speedy” Williams had a blocked shot returned straight to him. Williams quickly played in behind to Hoppenot, who put a laser of a shot in the back of the net for his first goal of the season.

Before the half, Hoppenot involved himself in another goal. As a loose ball caromed toward the Saint Louis FC goal, Hoppenot picked up possession, dribbled deep into the box and left a pass straight on goal. Lancaster, on loan from Major League Soccer’s Nashville SC, needed only one touch for his sixth goal in 2020.

“We wanted to throw something different at them, especially early on," Hoppenot said. "Me and Cam have been working really well together at practice, so we wanted to see if we could isolate their two center backs.

"Obviously, we were able to create a little bit of space and able to get my goal – Speedy finds me with an unbelievable ball that is easy for me to finish and then Cam does a great job the second one to get us a second goal.”

LouCity goalkeeper Ben Lundt secured his fifth clean sheet — one off the league lead — when forward Jason Johnson buried his first LouCity goal at the death on a cross from Brian Ownby. The tally was a long time coming in a game where the boys in purple out-shot Saint Louis FC 20-8, with 14 of those chances in the box, and controlled 64.8% of possession.

“Normally I don’t get anxious but tonight I was a little anxious," said the midfielder Williams. "We had control, but one bad step and they could get one and the game changes. That third one was huge.”

With the victory, LouCity moved back one point clear of Indy Eleven to lead Group E in what continues to be a close race for the No. 1 seed. The club also managed to separate itself five points from Saint Louis FC.

At the conclusion of a 16-game regular season, the top two from each group advance to the playoffs.

“It all started on the training ground," Williams said. "Our mentality every day we come into training, and training is really hard, so when we train hard, we come onto the field on game days and we play hard. That’s what you’re seeing.”

In terms of the season series — and final one with Saint Louis FC given the club will cease operations to conclude 2020 — LouCity evened things up after a prior loss and draw. Winner of their final meeting later this month will determine who claims the Kings’ Cup for good.

More immediately, LouCity travels to play Indy Eleven at 7 p.m. Wednesday inside Lucas Oil Stadium. The game will air on WMYO/My TV and AM 790 WKRD along with streaming options ESPN+ and the WDRB Now app.