Kernen: The good and the bad from Round 1 between LouCity, Indy Eleven 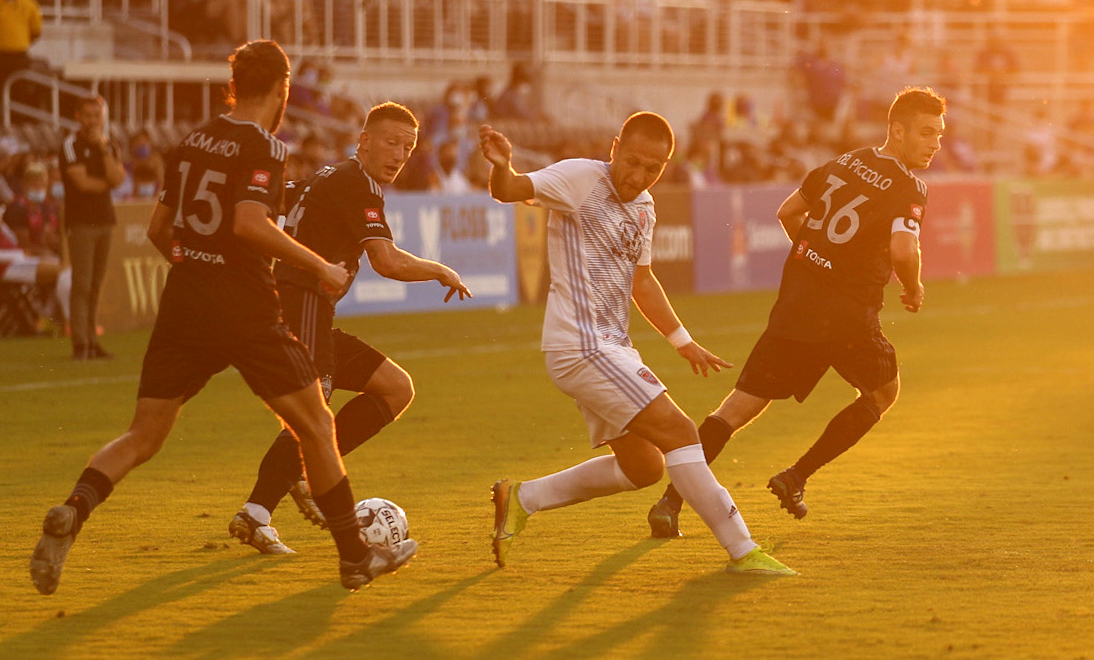 Louisville City FC played rival Indy Eleven to a draw Saturday night, and although the result was cast as two points dropped rather than a point earned, let’s take a deeper look at what clicked for the boys in purple along with what’s left to desire.

Limited Pasher and other impact players

This might sound odd considering Indy Eleven’s star striker, Tyler Pasher, scored in the second half to level the game, and he was assisted by another talented player in Andrew Carleton. But LouCity took a measured approach to keeping them quiet for the better part of an hour. In particular, defenders Sean Totsch and Wes Charpie funneled the likes of Pasher to the wings, rather than letting him cut inside where he is most effective. Keeping him from running in straight lines where he can use his pace was imperative. To add, Ayoze played in this game, and I barely noticed.

When the lineups were announced with Napo Matsoso playing on the right wing rather than in the midfield, more than a few people were scratching their heads. On the surface, Matsoso has all the hallmarks of a decent winger: an explosive first step, a modicum of technical ability and a high motor. He has a nose for goal, too, and was a big part of the offense in his college days at the University of Kentucky. The Lesotho international showed his ability in a new position for him at LouCity all game long, with the assist on the sole goal serving as the high water mark in the third minute. In his postgame comments, coach and sporting director John Hackworth admitted that he was looking to give Indy Eleven a few new looks that forced them to adapt, and it worked. This will not be the last time we see Matsoso him out wide.

LouCity leapt from the starting blocks, taking only 130 seconds to score — obviously an ideal start. Probably a bit shell-shocked from conceding so quickly, Indy Eleven made a number of errors that should have been more clinically punished. Also, the 4,850 spectators made their presence known, but if Lynn Family Stadium had been packed to capacity for this iteration of the Louisville-Indianapolis Proximity Association Football Contest, the crowd would have certainly added to that pressure. While no team can control an entire game, LouCity nearly owned the entire first half, and that was precipitated in part by Devon “Speedy” Williams’ goal. While scoring the opening goal is important, putting the opposition away is where one point turns into three.

Leaving food on the table

Missing shots is bad. I can give you a numerical analysis, expected goals and paint the boys in purple as if they have forgotten how to score. They haven’t. Yes, they should have put the game to bed in the first half, tucking Indy Eleven in with a passage from “Goodnight Moon.” But they didn’t. It is hard to square these two ideas, so just take consolation in the fact that this team has something left to prove in the next three matchups against its rival.

Not shutting down Pasher completely

In the first stanza it was all LouCity, but by the second frame coach Martin Rennie and Indy had figured out how the home side was handling Pasher. They adapted. Lesser teams would have simply stuck a man on Pasher for the entire game. That would have caused a knock-on effect that might cause more problems than it solves. Either way, playing a playmaker like that straight up means that defenders have to know exactly where the player in question is and, more importantly, where he wants to go. A lapse in focus, losing track of Pasher, and you could be picking the ball out of your own net, and that is what happened. It may be down to communication, or simply not diagnosing and adapting quick enough on the pitch.

Cameron Lancaster looked a bit isolated at times. It was always going to be tricky for the 27-year-old going up against the sizable back three that the Hoosiers presented, but I would have liked to see Lancaster come back and involve himself more in the buildup like he has done in years past. He set up shop on the shoulder of their back line and stayed there. Against some teams, that works. I did like the stream forward of a couple midfielders, especially Paolo del Piccolo, but the rest of the front three got slightly too high up the field, not leaving enough space to run into, at least in my estimation.

To close, a reminder that in sports, you are never assured anything. A 2019 USL Championship Final appearance guarantees you nothing in 2020. If LouCity wants to be the best of the league, or even the USL’s Group E, then draws won’t be good enough. The table does not make for light reading, but the fact that every game is essentially a six pointer means that things can, and will change fast. The pieces are here. Now it is just a case of putting it all together over the final 10 games.