The second leg of an SKC II home doubleheader kicks off at 8 p.m. Wednesday. 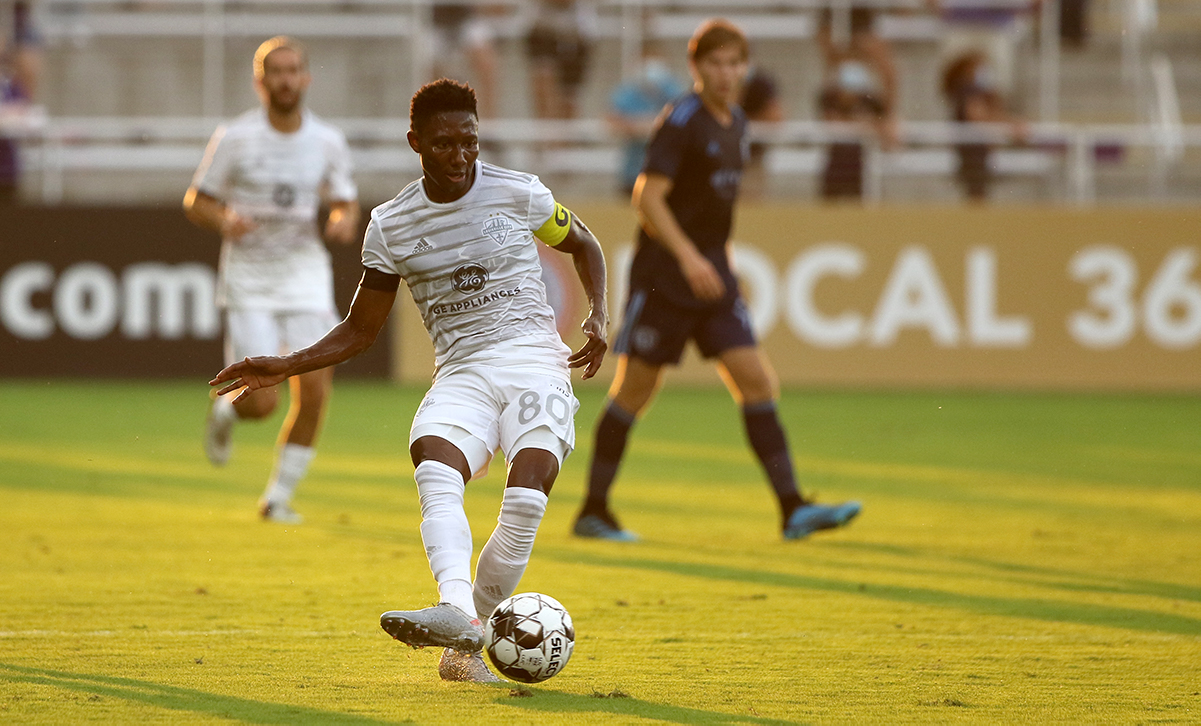 For the boys in purple, it’s another chance to pick up points in the USL Championship’s “Group E,” the pod also including Indy Eleven and Saint Louis FC from which the top-two clubs advance to the playoffs. LouCity registered a 1-0 victory on Saturday.

For Sporting KC II, it’s an opportunity for any sort of points. The Major League Soccer-affiliated side is without either a win or draw in 2020, mixing into its lineup five academy players on Saturday. The 29-year-old veteran Christian Duke led his group wearing the captain’s armband.

Here’s what to watch for…

"Both teams, you could see, it was a hard-fought game on Saturday night. Both teams seemed to have some players that had some issues at the end. I think for both of us now clearly, we are not telling each other what’s going on and there are some secrets, but we’re trying to figure out from our side how we can put out the best 11 possible. I’m sure Sporting Kansas City is doing the same.

“They have a more difficult task than we do because they have a game on the weekend, where we don’t have a game. We might have a little bit more chance to take a risk where they have to manage these three games in a week. It’s going to be interesting and tough, from both of us, but I do expect you will see some new faces out there by necessity.”

LouCity: Goalkeeper Ben Lundt, who has battled for playing time with Chris Hubbard early this season, solidified himself between the posts when the FC Cincinnati loaner saved both Sporting KC II shots on goal within 60 seconds of one another last Saturday. Should he get the call again, Lundt would earn his fourth start in five games this season.

Sporting KC II: Forward Enoch Mushagalusa had the best look on goal last weekend against LouCity when he slipped past the back line in transition, dribbling forward for a one-on-one encounter with Lundt. The shot was cleared, but it complemented an evening in which he also completed 94% of passes while working the right wing.

• Sullivan: LouCity cracks down on fans without masks

• Crawford: LouCity breaks out of restart rut with win in new stadium

Group E update: Sporting KC II (0-3-0, 0 points) is the only team in this USL Championship pod without a point. If LouCity (2-2-0, 6 points) keeps it that way, there’s an opportunity to hold the Indy Eleven (4-1-0, 12 points) in striking distance still with 12 regular-season games to go. Saint Louis FC (3-1-0, 9 points) is the other formidable member of the group having handed Indy its first loss of 2020 on Sunday.

On the rebound: Only twice since coach John Hackworth has led LouCity dating back to the middle of the 2018 season has the club lost back-to-back games as it did upon the USL Championship restart. The last time it happened, on July 20 and 28 of 2019, the boys in purple responded with a 10-game unbeaten streak setting them up for a postseason run to the league’s championship game.

The Golden Boot: Forward Cameron Lancaster, who set the USL’s scoring record with 25 goals in 2018, is back with the boys in purple on loan from Major League Soccer’s Nashville SC. And the impact has been noticed. Going back to LouCity’s March 7 season opener, just before play was shut down, Lancaster has two of the club’s three goals, including a 50th-minute header that beat Sporing KC II in the teams’ first meeting on Saturday.

The other side: Sporting KC II’s goalkeeper, Brooks Thompson, is in the midst of a homecoming as a southern Indiana native climbing his way up the professional ladder. Thompson made nine saves July 18 against Indy Eleven and stopped another one Saturday against LouCity. He was part of a rather young lineup with the average age of Sporting’s starters just 21.8 years old.

Squad rotation: Hackworth fears Group E members “might beat each other up along the way,” making depth in short turnaround situations like Wednesday key. Hackworth made two changes in last Saturday’s starting 11. He may be due another one after defender Wes Charpie left following a rough opposing tackle in the 59th minute. Aside from that, LouCity has a healthy roster.

JoGo subs in: Youth international Jonathan Gomez, who has represented both the United States and Mexico, logged 26 minutes across his first two LouCity appearances since the USL’s restart. The 16-year-old left back — in Louisville on a professional contract — is a player to watch bringing in some first team experience with FC Dallas system and with USL League One side North Texas SC.

Roster addition: Forward Jason Johnson, a Jamaican international who most recently suited up for the Western Conference’s Phoenix Rising, added to some firepower Monday when announced as LouCity’s newest signing. Johnson missed most of 2019 with an injury. But two seasons ago, he tallied nine goals, including a soaring scissor kick that won USL Goal of the Month for June of 2018. Johnson is available for selection Wednesday.

In the stands: LouCity’s attendance of 4,850 (about 30% of maximum capacity) in its first three games back have marked the highest number of people to attend team sporting events in the country since the COVID-19 pandemic put sports on pause. Club officials are following local government guidance and the Venue Shield plan devised by stadium operator ASM Global that calls for wearing masks in the building, physical distancing and temperature checks, among other measures to keep fans safe.