LouCity erases 'a strange feeling' with victory over SKC II

The boys in purple say they have confidence back leading into a Wednesday rematch. 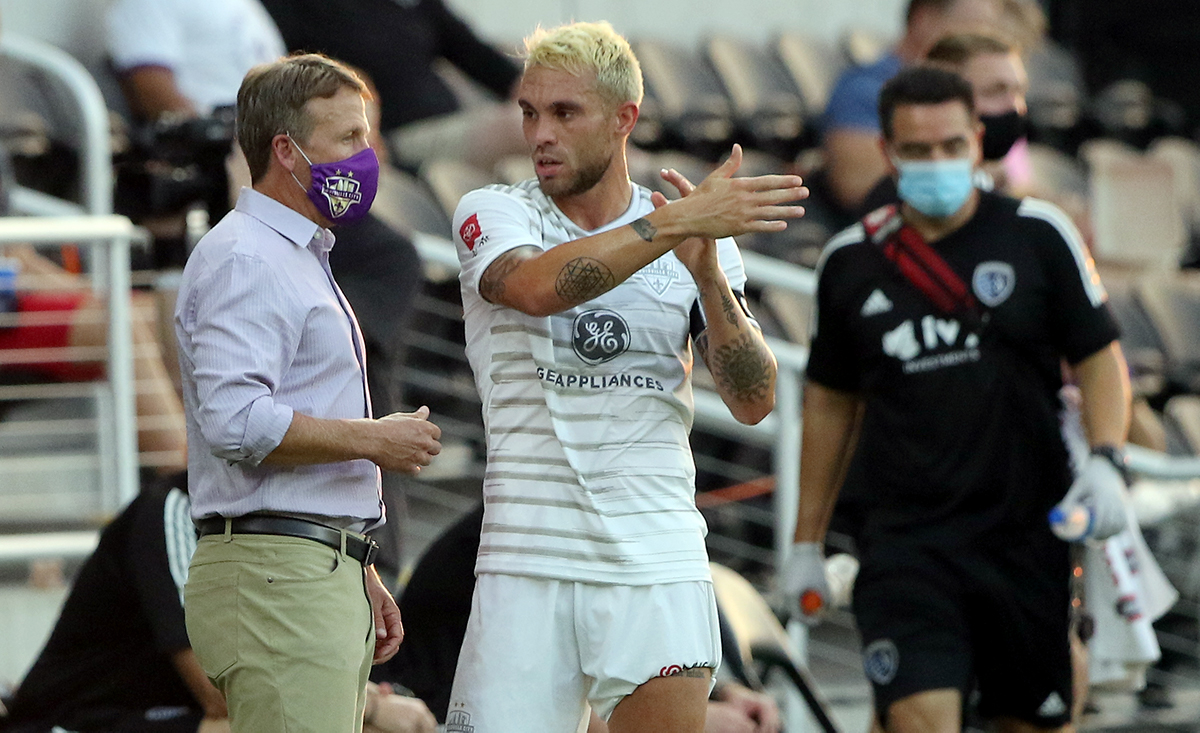 The message with two straight defeats preceding a 1-0 victory over Sporting KC II? The boys in purple feel as if they have momentum again.

“You want that and you want the confidence,” said defender Oscar Jimenez. “When you don’t pick up wins, there’s doubt, especially with a group like this that is so used to winning. It’s a strange feeling, so it is great to get that win but it’s a 1-0 victory — a gritty performance.

“There is a lot of stuff we can improve on and get better at. Hopefully we can do that next game.”

LouCity, which one the USL cup in 2017 and 2018, then reached the final again in 2019, would have put itself in a precarious position amid a shortened season without points earned against Sporting KC II.

The visitors — who will remain in Louisville for an 8 p.m. Wednesday rematch — were also without a win since the USL Championship restart.

Cameron Lancaster's 50th-minute header assisted on a cross from midfielder Niall McCabe made the difference early in the second half.

“I just try and put it in dangerous areas and let them do the rest,” McCabe said. “Thankfully Cam is pretty good at doing that. It was a great header.”

Sporting KC II had a pair of opportunities to equalize, both in the 63rd minute. LouCity goalkeeper Ben Lundt cleared them off to keep a clean sheet.

“Two huge saves from Ben really kept them off the score sheet, and that is massive and what you need from your keeper in those moments,” said LouCity coach John Hackworth. “It has been a really competitive battle between Chris (Hubbard) and Ben, but we talked about whoever was going to play tonight needs to step up and make the most of the opportunity. Ben certainly did that.”

LouCity improved to 2-2 on the season. Six points equal the tally of rival Saint Louis FC in the USL’s “Group E” standings led by Indy Eleven’s 12 points. The top-two finishers at season’s end make the playoffs.

Sporting KC II rounds out the group, but LouCity’s players remarked on the challenge ahead this week. Different lineups can be expected owing to rotation, making depth of high importance.

“There are no easy games, and they’re a great young team with some brilliant players, so it won’t be easy for us for sure,” McCabe said. “With a quick turnaround we will have to use the squad and I’m sure they will as well.

“We had a couple of guys go down with knocks and stuff like that, so we will do our best to manage that with the quick turnaround and see where we can go Wednesday.”