The former Golden Boot winner's strike made the difference against Sporting KC II. 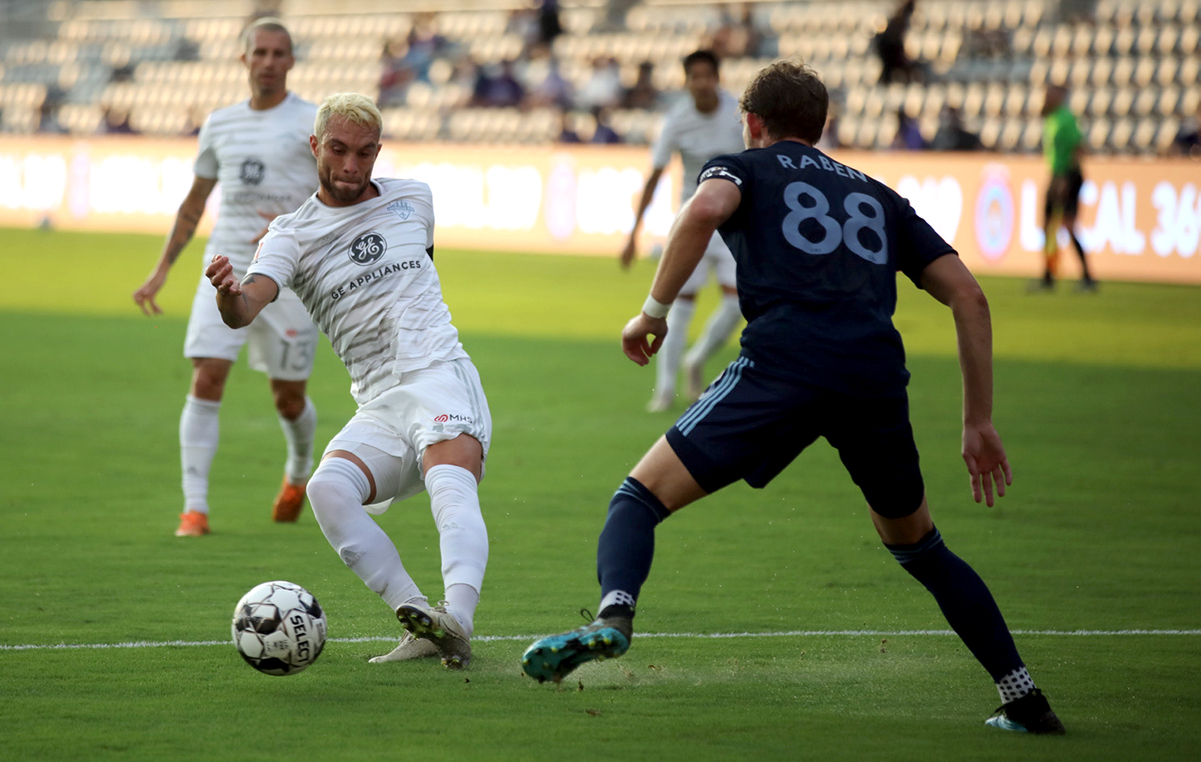 Having entered Saturday on a two-game losing skid, Louisville City FC managed to resume business as usual, defeating visiting Sporting KC II in familiar fashion for the boys in purple.

Dominating possession in the attacking half of the field, LouCity broke through in the 50th minute when midfielder Niall McCabe found striker Cameron Lancaster’s head on a cross from out wide.

Goalkeeper Ben Lundt then turned away Sporting KC II’s best shots on goal — both in the 63rd minute — for a 1-0 first victory for the franchise inside Lynn Family Stadium.

"Obviously a much better feeling this evening, and I’m really proud of the team," said LouCity head coach and sporting director John Hackworth. "We needed to come out and have a response from our last two matches and specifically do it here in this building. I thought the team had some good moments in that game and played some excellent soccer. Particularly I was pleased with coming out of halftime and the adjustments that were made.

"I really thought the guys put them under pressure early and obviously getting the goal. Then, it turned into being a little bit gritty and a grind, but you have to do that. I think that’s one thing: When you play the way that we do, you lose a couple and it’s easy to think, ‘Are we actually going to get up?’ Huge credit to these guys. They dug deep."

LouCity improved to 2-2 with a win over its USL Championship “Group E” rival, with Sporting KC II staying in town for a rematch Wednesday. Those two clubs along with Indy Eleven and Saint Louis FC will battle throughout this abridged season for a pair of playoff spots from the regional pod.

According to Opta statistics, LouCity just edged out Saturday’s visitors in possession, holding the ball 50.3% of the way. But in doing so, the boys in purple more than doubled Sporting KC II in shots (15-7), open play crosses (20-9) and corners taken (4-1), keeping proceedings primarily on their preferred side of the half line.

“We know the first two games hadn’t been good enough at all here, and this club is used to winning and winning the right way – with hard work and good football and all those attributes that we’ve shown over the last five years," McCabe said. "We really looked at the first two games, and it wasn’t acceptable on our part. We really wanted to make it right — get a win for us, the fans and everyone involved who put in hard work and give us something to build on.”

Neither team managed a look on goal in the first half, with LouCity defender Oscar Jimenez deflecting away the best opportunity when Enoch Mushagalusa had a point-blank look on the home side.

But Sporting KC II also rolled out a lineup with five academy players and an average age for its starters of 21.8 years old. The veterans took control shortly out of the locker room.

Lancaster, the USL’s 2018 Golden Boot winner on loan from Major League Soccer’s Nashville SC, nearly put LouCity ahead in the 47th minute. He elevated a ball into the box with one touch, and his succeeding bicycle attempt skirted just wide.

Three minutes later, Lancaster's second goal of the season dating back to a March 7 game winner at North Carolina FC evened his club’s record on the season.

"Toward the end of the first half we had a big stretch where we kept the ball and we were moving it quickly," Jimenez said, "and I think going into the locker room at halftime we spoke about being calm under pressure and being able to string some passes around to open them up.

"I think that is what we did in the second half – strung some passes and found Niall out wide who put a really good ball in for Cam who made a good run."

Lundt, between the posts as LouCity’s starting goalkeeper, preserved the victory with a one-on-one save against Sporting Kansas City II’s Jaret Townsend before staving off another try by Mushagalusa, both within 60 seconds.

LouCity nearly added to its tally in stoppage time when Brian Ownby and Luke Spencer traded touches, with Spencer getting the final nudge into the back of the net. The goal was called off due to a ruled hand ball, but LouCity walked away with all three points nonetheless.