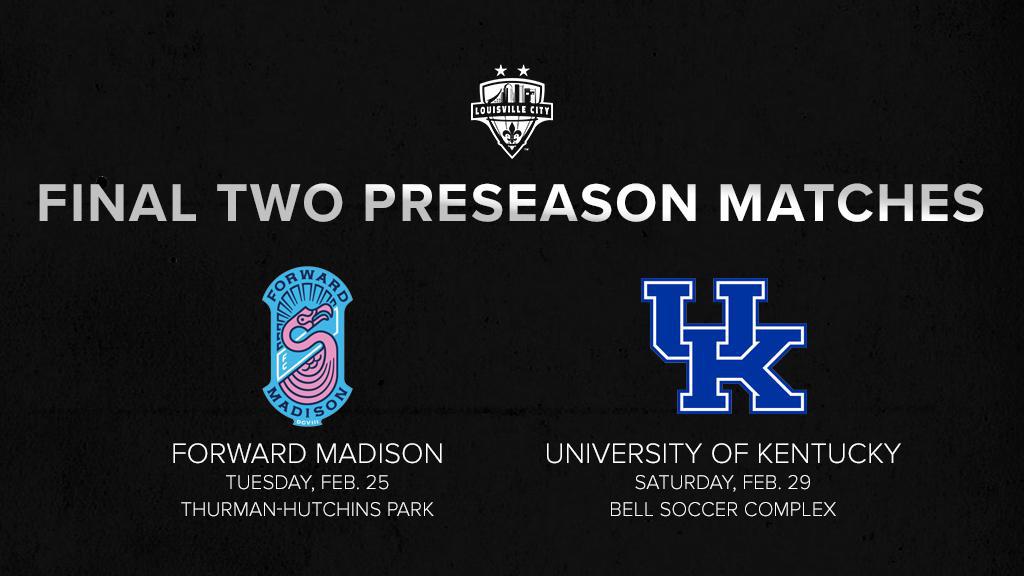 FRIDAY, FEB. 7, 2020 – Louisville City Football Club announced the final two preseason matches of 2020 Friday, confirming a friendly with Forward Madison of USL League One and a matchup with the University of Kentucky.

After making the USL Championship Final for the third-straight season in 2019, Louisville City coach John Hackworth put together a challenging preseason schedule which consists of training games in Florida vs. D.C. United and Nashville SC, a trio of games in Utah and two more preseason matches once the team returns to Kentucky.

LouCity opened its preseason with yesterday’s test vs. D.C. United. On Sunday, the Boys in Purple will take the field vs. Nashville SC at IMG Academy in Bradenton, Fla. After returning home to Louisville on Feb. 10, Louisville City will travel to Utah on Feb. 14 in preparation for the 2020 Wasatch Cup.

Louisville City will return to Kentucky to host USL League One’s Forward Madison at 3 p.m. on Tuesday, Feb. 25 at the Louisville City Training Grounds at Thurman-Hutchins Park. The Feb. 29 match vs. Kentucky will kick off at 5 p.m. at the University of Kentucky’s Wendell and Vickie Bell Soccer Complex.