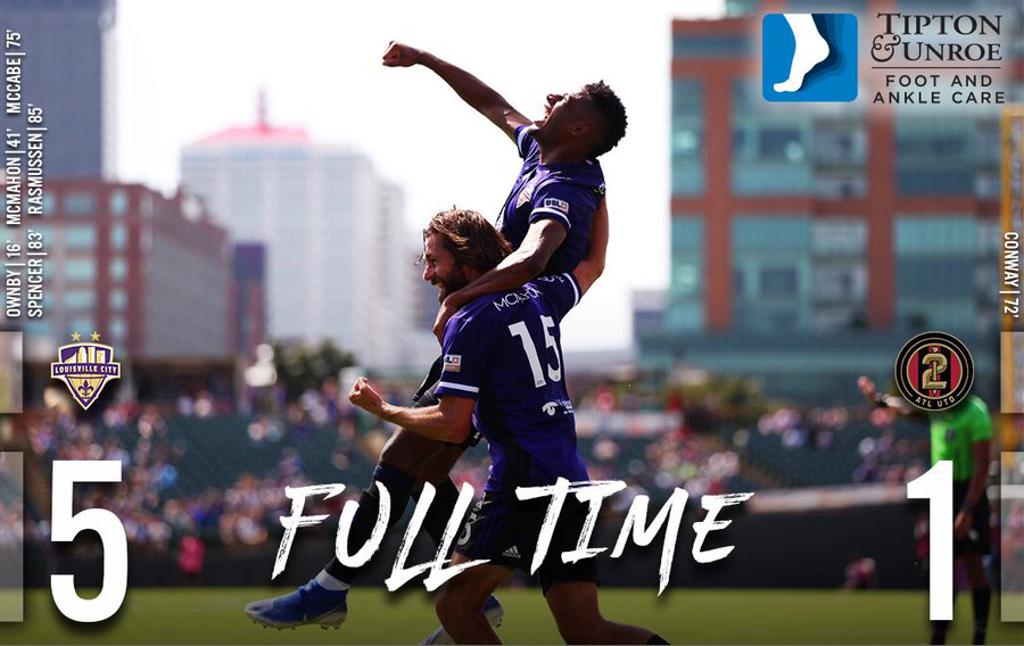 Louisville City notched five goals during a 5-1 rout of Atlanta United 2 Sunday afternoon at Slugger Field. The two-time defending champs scored early and often in front of a strong crowd of 9,292 fans.

“You could feel in the locker room the minute the guys walked in today,” Louisville City coach John Hackworth said. “Everybody was together.  We addressed how this was an issue for us all season so far.  Playing these MLS two teams, we’ve let our guard down, and we certainly didn’t do that, and it starts with our veterans and leaders.”

The scoring started with a goal by Brian Ownby in the 16’. One of Louisville City’s all-time best post-season players, Ownby hadn’t scored a goal yet this season, but he broke through Sunday.

“Especially that first goal, getting it early and trying to execute our game plan from the opening whistle was really important for us,” Hackworth said. “We talked about scoring first and winning that first half and we certainly did that.  So, it was a very positive start for us.”

LouCity (10-7-6) went into the half up 2-0 after right-back Pat McMahon scored on a left-footed goal in a crowd off a set-piece.

“I was like a third runner there, I just kinda checked away and move towards it. I saw the ball skip through; I stuck out my foot,” McMahon said. “It’s a lefty goal and I’m a righty, so I was lucky for that. But yeah, they told to make that third run just in case the ball squeezes through.”

“They had just scored, and they had just hit the crossbar,” McCabe said. “We were kind of on the ropes a little bit. It came at a really important time. It kind of broke them a bit mentally and we were able to go straight on from there and grab a couple more. So, it was really important and just glad that it came at a good time.”

Luke Spencer scored LouCity’s fourth goal and Magnus Rasmussen capped off the scoring with a goal in the 85’.

“I’ve been saying it all season long,” Hackworth said. “These goals were going to come.  We create to many good opportunities; I am surprised we didn’t have a few more going into halftime.  To your point, I think we you get five like this and guys feel like they should’ve had another and another, that’s a great thing.  To build off of last week going into this week, the only thing we didn’t get today was a shutout, which we wanted but we didn’t actually get it.  But the goals are coming, and I think you saw our front line was in sync today, especially the movement from Ownby and Antoine (Hoppenot) was excellent.  Then you have got Luke and George (Davis IV) coming off the bench, that’s five attacking players right there that are coming on and execute so that’s exactly what we want.”

Louisville City gained another three points for the win, moving up to 36 points on the season. Just four points separate 4th place Indy Eleven from 7th place LouCity with 11 matches to go in the regular season.

Louisville City heads to Charleston this weekend to face Charleston Battery Saturday night at 7:30. Charleston (6-5-9) are currently in 9th place with 27 points.