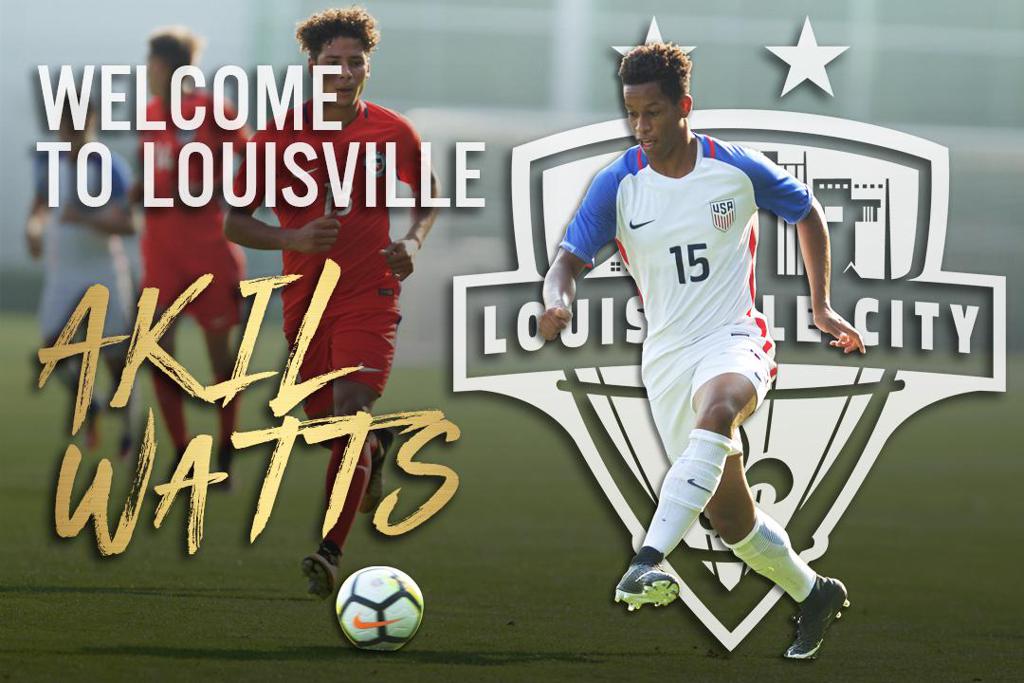 Louisville City FC announced the signing of Akil Watts to the LouCity roster, pending league and federation approval and international clearance. The right back from Ft. Wayne, Ind., joined Louisville City in training Tuesday and will join the team through the remainder of the season.

"Bringing Akil to Louisville City is an important signing at this point in our season," Louisville City FC coach John Hackworth said. "I know Akil well from our time together in the US U-17 MNT Residency program, and I know what kind of talent he brings to our roster."

Watts said the connection with Hackworth was what brought him to Louisville City.

"I've played under Coach Hackworth before and I know how great of a coach he is," Watts said. "It means a lot that is showing faith in me and I don't want to let him or this club down."

Watts was part of the US U-17 MNT roster that competed in the 2017 FIFA U-17 World Cup in India playing under Hackworth.  In that tournament, the U.S. lost in the quarter-finals to eventual Champion, England.   It was at this tournament that Akil was scouted by several European clubs, and upon turning 18, he signed with RCD Mallorca in Spain.

Watts spent the last year playing for RCD Mallorca, but when the club was promoted to La Liga at the end of last season, he found himself on the outside looking in as the club changed coaching staffs and looked to bring in new players to bolster its chances to compete in Spain’s 1st division.

"Akil has international experience at both the club and national team levels." Hackworth said. "Despite being so young, he already has excellent experiences that should allow him to excel here in the USL Championship.”

Watts is looking forward to getting on the field with his new team.

"It's an honor to be here," Watts said. "I've seen that Louisville City has won it twice in a row and that shows how committed and together this club is. I just want to come in and show that I belong and that I can help this club out a lot."

Watts joins a Louisville City roster full of veterans, some of whom are more than a decade older than he is. That's nothing new for Watts.

“I’ve known him since he was 4 or 5 years old and there was always something unique about him,” said Bobby Poursanidis, Watts' club coach at Fort Wayne United. “There was something different about him. I watched his growth and a lot of it has to do with training with his brother. He was always training 4 or 5 years up. It was really a treat for us to see and identify his talent.”